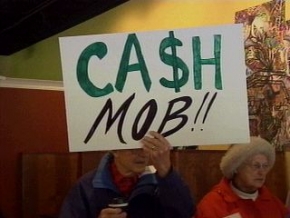 Local retailers (and you too ASTRA) take note, the “Cash Mob” may just be the next marketing innovation.  “Cash Mobs"  are like “Flash Mobs” but with a purpose…to drive people to support local businesses.

A “Flash Mob” is defined by Wikipedia as “… a group of people who assemble suddenly in a public place, perform an unusual and sometimes seemingly pointless act for a brief time, then disperse, often for the purposes of entertainment, satire, artistic expression. Flash Mobs are organized via telecommunications, social media, or viral emails."

The term “Cash Mob”,” however, is so new that it has not made it to Wikipedia.  Just as in a “Flash Mob”, the organizers communicate  a place and time for people to assemble.  But unlike a “Flash Mob”, “Cash Mob” participants are there to support a local business by spending money and making news for the store.

There is a very interesting article on the subject in the New York Times entitled "Cash Mobs Promote Spending (and Scocializing) Locally."  The article quotes Andrew Samtoy, a 32 year old lawyer and guiding light of the movement, who suggests the following when creating a “Cash Mob”:

[Choose] a business that is supportive of the local community, and not identifying the store too far ahead of time to create an element of surprise. …(Typically, a meeting place is announced a week ahead of time, and the identity of the store is revealed when everyone gathers.) The spending goal should be no more than $20 a person, although people can of course spend more if they choose. And organizers should give the store owners a heads up, so they aren’t overwhelmed.

For those who want to know more about “Cash Mobs", check out the “Cash Mob” blog authored by Andrew Samtoy.  He gives the latest happenings on “Cash Mobs" as well as how to put them on.

Have any of our readers participated in or are planning a “Cash Mob”?  If so, let us know.