ideas (so many toy and game inventors here). Well, Cincinnati is another one of his favorite stops and Michelle Spellman did an amazing thing – she put together a catalog for the public of toys and games invented in Cincinnati – The Cincinnati Game & Toy Industry Professionals Holiday Gift Guide! Some of you know Michelle through a game she and her husband Jeff invented, Jukem Football, which is selling quite well in the stores and receiving a lot of media buzz. But Michelle is an incredible force of energy and sunk deeper into our industry, she put together a group of Cincinnati toy/game industry people that meet regularly and then the Gift Guide. I asked Michelle to tell us how it all came about and came together.

Michelle: The Cincinnati Game & Toy Industry Professionals is a networking group that lives primarily on

When I entered the toy and game industry four years ago, I wanted to connect with other people in the space to learn and find the resources I needed to get my company off the ground.

I discovered that there were a surprising number of toy industry veterans flying under the radar, doing all kinds of jobs in the Cincinnati region.  As many of you know, Kenner Toys was here in Cincinnati for nearly 50 years, before being acquired and subsequently moving to Hasbro’s Rhode Island headquarters in 2000.  When Hasbro left town, many people thought the toymakers left too.  But as it turns out, they didn’t.

A large number of former (Kenner) Hasbro employees remained here.  Many left the toy business and took positions in other industries.  But many others continue to work as independent designers, 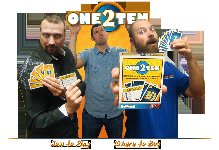 inventors, consultants, agents, and provide other professional services to toy companies all over the world.

In addition, the University of Cincinnati’s Design Art and Architecture Program (DAAP) has a long history of producing accomplished toymakers who produce toys for numerous evergreen brands such as Star Wars, Nerf, Barbie, Hotwheels and many, many more.

Cincinnati toymakers stake claim to numerous toy industry “firsts” dating back nearly 150 years.  From
the first electric toy train (before the famed Lionel brand), to the first U.S. patent granted for a toy that would many decades later be known as the “yo-yo,”  to the first 3.75” action figure (which defined today’s industry standard).  This is just the tip of the iceberg of Cincinnati’s rich heritage as a hotbed of toy and game innovation.  Toy making is in our blood here!

After attracting venture capital funding and having social media success with Jukem Football, people began asking for help on how to bring a toy or game to market.  It was fun to meet with these folks and share my experiences and “lessons learned” over coffee.  But there were more and more of them.  I needed to find a more efficient way to help.

I felt that if I could bring all of these people together, new opportunities for collaboration could be fostered in Cincinnati. Ultimately, my hope was that it could help create more jobs for this region.

So I created a group on Linkedin and sent out invitations to join to about 20 people.  Within two months, we had over 40 members.  Four months later, we had over 80.  We began hosting quarterly breakfast meetings to bring the group together in person.  These events are extremely popular and we have sellout crowds and a waiting list for every event. As we look forward into 2012, we now have over 200 members.  We have folks in our group touching products in virtually every stage of the development process from inventing, R&D and design, to manufacturing, packaging and production, to marketing, distribution and sales.  Our members reach across the industry spectrum, working with global brands and local startups like me.  We are in the process of developing a programming calendar for the coming year, and recently presented a session on intellectual property protection featuring local toy industry law veteran, Jim Kipling, that was a smashing success.

Last year, at our holiday event, a local television station sent a news crew to see what we were up to.  We were able to spotlight a few of our members’ newest products. This year, I wanted to find a way to shine the spotlight on Cincinnati’s toymakers and create awareness of the group, our members’ accomplishments, and the region’s toy heritage.  I decided to compile a gift guide.  I put out a call to our membership for submissions of products they’d worked on that could be found on store shelves for the 2011 holiday shopping season.  I figured I’d get maybe a dozen or so items.  I was astonished when I finished our list with over 30 products!  To round out the guide and add and perspective, we included several classic toys such as Sit ‘n Spin, Play Doh, Easy Bake Oven, the Magic 8 Ball, and UNO – all of which originated in Cincinnati.

The gift guide literally has something for everyone – all ages and genders.  It’s completely within the

realm of possibility that a family could have a 100% Cincinnati Toymakers Christmas this year if they wanted to!  That makes me very proud.  Cincinnatians tend to be modest people.  They quietly go about their business doing amazing things, and they don’t toot their own horns enough.  I’m making it my mission to reinforce Cincinnati’s rightful position on the global toy map as an innovation destination.