We began a Changing the Way We Play series before our ChiTAG events with Brian Torney's article Changing The Way We Play – Star Wars Collectables (1977) Part 1 and now we continue with Sam Wells of Kunoichi.

Sam is another talented industry colleague and play expert. We worked with him on our Social Media at 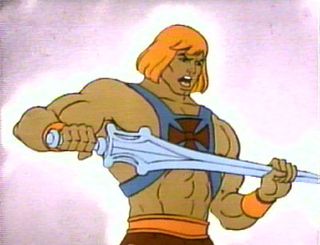 Play Conference this year. He spent seven years in comics publishing assuming many different roles ranging from editor to publisher to designer and occasionally writer.  He’s the owner and main contributor to Toydejour.com, an off-beat toy review blog that has been giving unsolicited opinions and weird photos since 2007.

Every so often a product comes along and changes the way we play.

Take a look at any major selling toy line on the shelves today (Transformers, Power Rangers, My Little Pony, etc.) and you’ll see at only the tip of the iceberg when it comes to that brand.  Resting just beneath the water is a massive structure of support for each toy line comprised of comics, video games, trading cards, websites and a slew of crazy miscellaneous licensed products.  All are necessary to keep that brand above water, so to speak. But at the very base of this now hard-to-maintain iceberg metaphor you’ll find cartoons. The very soul of any branded toy line is the story told in animated series, and in recent years it’s become quite blurred whether the toys are a means to promote the shows, or if the shows are a means to promote the toys.  But it hasn’t always been that hard to define.

While the generations before us were dazzled as children by some amazing Warner Bros. and Disney cartoons, they were never able to bring those characters home and create their own stories right in the family’s living room or under the covers with a flashlight while they were supposed to be sleeping.  Sure, there were products that related to the characters in these earlier cartoons, but nothing that was directly tied-in and marketed solely to the show’s target demographic.  This was due mainly to a rule set in place by the FCC that prevented such direct advertising by use of children’s programming.  After an increased deregulation and an overall drop in FCC oversight in the early 1980s, new floodgates were opened and everything known about cartoon/toy tie-ins was turned upside down.

The first company to take advantage of this leniency was Mattel, who, partnered with the animation studio, Filmation, was in the early stages of planning its new toy line: “He-Man and the Masters of the Universe.” This newly opened door gave Mattel the edge it needed to bring the new brand to life and eventually get it in front of millions of potential customers. This was met with valid criticism from parents and activists, who protested that the new cartoons were nothing more than a cleverly disguised commercial, generated as another vessel for driving sales of He-Man toys. Numerous letter writing campaigns followed, in hopes to have this and subsequent shows removed from the air and out of the homes of families around the country.

He-Man and the Masters of the Universe bares the distinction of being the first cartoon of its kind to showcase various products and characters in a traditional 22 minute animated show with the primary goals of moving product and telling a good story, in exactly that order.  At the time many people saw this as Mattel’s underhanded means of getting their brand in front of their target market. Now as adults in the creative industry and former targets ourselves, many of us can truly appreciate how Mattel and Filmation changed the game, or rather, changed the way we play.

With an estimated average of $12.5 billion in annual sales in 1987, up to $22.9 billion in 2005, toy
companies are constantly trying to outdo themselves, looking for new ways to promote themselves that are as ground-breaking as the animated series was in its time.  As Neil Friedman (President, Mattel, Inc. 2005 – time of this article) stated, “Innovation is key in the toy industry and to succeed one must create a 'wow' moment for kids…” which is exactly what the cartoons of the 80s were for those of us who grew up with them.

When the cartoons of the 80s began to air with accompanying toy lines, not only was I able to get my grubby little hands on the familiar characters, but I was also able to re-enact tales I had seen on TV and make up my own based on what I knew of each character’s personalities and goals. This was apparent to all other toy manufactures as they watched Mattel’s profits on He-Man soar, forcing these other companies and brands to do the same. These competitors had to step up their game and develop their own television shows, comics, video games and eventually movies. It revolutionized what the word “brand” meant to the toy industry and caused a sleeping beast to rise up, dust itself off and become one of the most innovative and competitive markets of the past three decades.

It’s a basic principal, easily equated to the structuring of math (just as any complicated video game follows); you give the most basic equation and once that is understood you are able to build upon that and so on. Giving everyone in a certain industry a starting point such as cartoons have become for toy lines, will not only make it easy to build upon, but often times will give way to those visionaries that question the starting point and reinvent the whole standard.

It’s not to say that it’s impossible for a toy line to thrive on design and playability alone, but with little to no connection to a cartoon or video game, it’s a rare occurrence that this is the case.  Setting aside the niche market of designer collectible toys that thrive on their community-based and social networking roots, one would be hard pressed to name a toy brand that has seen the same level of success based on the product’s merit as a toy alone, as those with television shows or the rest of the supporting “iceberg.”

The level of success I mention here can clearly be seen by looking at the first two years after the launch of He-Man and the Masters of the Universe.  Within that time the toy line sold more than $500 million worth of action figures as well as an additional $500 million of related licensed products.  This wasn’t just good for Mattel alone; advertisers also saw this as a golden opportunity – considering that before this new breed of mid-afternoon or after-school programming, their budgets were spent in the dreaded Saturday morning cartoon graveyard. Advertisers were now able to get their products in front of not just children but also families. Getting to stretch their message to the moms that ultimately made the decision on what was being brought into their homes, both with products as well as programming.

Some critics of cartoons argue that children who watched shows such as He-Man and the Masters of the Universe instead of being given a generic toy with no backstory were less likely to expand on their own imagination. However if you look at the innovations that our generation has come across in the last five to ten years alone, I’m positive there’s no question about our ability to evolve and create when given a platform to start from.  Based on that view of our ability to take a standard and build upon it, I’m certain that the following generation (those darn videogame kids – don’t get me started…) will no doubt reach even higher with their concepts, business strategies and creative outlets.  So I applaud Mattel and Filmation for not only being the first to innovate the standard, but also to successfully advertise to us in a way that not even 30 Rock could do as well with their jokes about forced product placement within their episodes.

Those of us active in toys and gaming today can only speculate what the next big evolutionary leap in the industry will be with hopes that we’re a part of it. But I think that’s exactly what we need to drive us toward that leap; a better understanding of where we are now as a result of where we’ve come from. Having a jumping-off point laid out for us sure doesn’t hurt either.