Whether Hamley’s is the world’s biggest toy store is open to debate, but this London based, seven story behemoth, certainly is in competition for the honor.  One could anticipate that this 130 year old company would be too conservative to change  the way it markets toys but that is not the case.  It has gone gender neutral.

According to Toys n’ Playthings: “… after pressure from feminist groups, the toy store has had to change its signage. Now the signs are white with red lettering. In addition, the toys have been reorganized by toy-type rather than the gender which is traditionally expected to play with it.”

I have long felt that any changes in how we market and merchandise toys will have to start at retail.  Who thought it would be one of the world’s oldest toy stores that will lead the way.  It appears that the changes were either the result of a campaign by a blogger named Laura Nelson or Hamley’s own decision that its current signage was confusing.  After reading several articles on the subject, it looks to me that despite Hamley’s protestations, they were pushed by what appears to have been an aggressive campaign against what Nelson calls “gender apartheid” in the toy department. 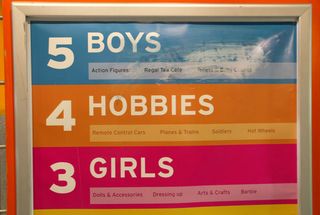 I checked out Nelson’s BlogSpot, Delilah, and there I found a summary of the letter she had sent to Hamely’s and what she says caused the changes.  She says that she:

Whether Hamley’s was pushed or jumped is ultimately beside the point.  They have decided to make the change and that will have an impact.

A special thanks to Nancy Davies of Interplay for bringing this to my attention.