We have gotten a great number of comments on my Top 10 List of Toys and Games in History (See Part 1 and Part 2).  One of those was from the hightly respected Yehuda Berlinger who has written about board games and ludology for eight years. Yehuda wrote me that he had independently created his own list in 2007 so I asked him if we could print it.  He agreed so please read it and see  how it compares with mine.

Just so you know, Yehuda designs games, consults as a game designer, and organizes a weekly game group. He has worked professionally for more than twenty years as a UNIX systems administrator, a web programmer, and a technical writer. He is now 42 years old and lives in Raanana, Israel with his two children. He blogs at http://jergames.com and http://purplepawn.com . 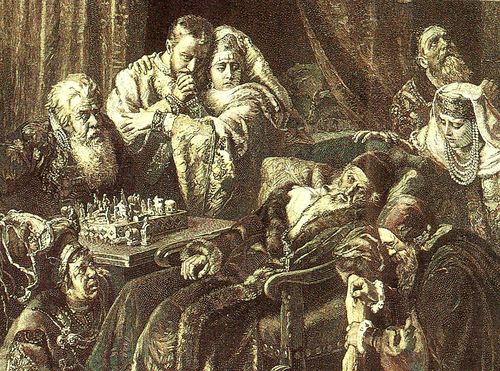 Please note that I didn't say the best games ever created, the most influential games, or the most famous game moments.

When trying to evaluate the most "important" game moments, you have several possible interpretations. For instance, when a Chess event changes the world, which is more important: that event, or the key game before it that allowed the event to happen?

Like every grade you earn in school that keeps you from failing, or every link in a chain, all the key games that happened before the event took place were critical games, unless the event would have happened anyway, perhaps with different players or a different game.

Sports events precipitate the movement of billions of dollars worth of money every year, maybe trillions. Not to mention all the people whose lives are affected by these events: wars put on hold, international cooperation, hopes ruined, inspiration shared, and so on.

There have been important political or inspirational sports moments throughout history: Jesse Owens at the Berlin Olympics comes to mind.

The BBC writes: "According to legend, the Olympics started in 776BC with a single race, a 192-metre dash held at the sanctuary of Zeus in Olympia. Then, a runner named Koroibos sprinted ahead of the field to become the first Olympic champion."

Chess has done more than simply influence every game since. It has also changed the way we look at the world. We have so adopted it's metaphor into our culture that our most basic political and military maneuvers are influenced by, described as, and mocked as games of Chess.

Chess began a century earlier, but it needed the approval of the forces in sway to spread. Without that approval, it's possible that Chess would have submerged again for several hundred more years.

In 638, The Caliph Omar either observed a game of Chess or played one; I don't know which. Either way, that game was the inspiration for him to sanction chess among the Islamic people. From them, it spread to the rest of the world.

Only Chinese Chess is played today by more people than Go. But Chinese Chess, which is possibly more difficult than European Chess, is still child's play compared to Go. The rules and pieces of Go are so simple, it is understandable how many people believe the game was simply given to humans by some divine inspiration.

The Chinese played Go for thousands of years before Japan did. Go is even considered one of the four arts of the Chinese scholar. But it was Japan that made it into the mighty force it has been for the last thousand years. In Japan, Go players achieved respect, then laurels and reverence, and then professional status.

Japan has 24-hour television stations and daily newspapers devoted to the game. The game's influence on culture, art, politics, and the military are even more pronounced than European Chess's influence in the Western world.

Sometime in the 8th century, Kibi no Makibi was sent by the Japanese Imperial Court at Nara to the Chinese T'ang dynasty capital at Ch'ang-an. Either he played a game of Go, or he observed one, I don't know which. As a result of that game, he brought Go back to Japan, where it eventually became popular with Japanese aristocrats and eventually the Imperial Household.

Ivan the IV, or Ivan the Terrible, introduced serfdom to Russia and then burned or pillaged tens of thousands of people to death.

He was finally stopped after trying to rape the sister of one of his advisers. Though he let her go, the adviser began to fear for his life for having been a witness to the event. Three days later the adviser engaged Ivan in a game of chess, and Ivan suddenly fell dead from what was later discovered to be mercury poisoning. Apparently, the game was used to put him off guard.

5. 1775, Lottery Pays for the Revolutionary War

Gambling games, lotteries, and dice games go back to the bible and before. Numerous biblical tales talk about casting dice or lots, sometimes for religious reasons. Christianity has historically been rather murky regarding its policy toward this pastime.

On the one hand, lotteries were often held to finance various expeditions, like the ones to establish Christian colonies in the new world. On the other hand, zealots came down hard on idlers who engaged in any sort of gambling while actually in the new world. At least until a new church was needed. I guess it depended on why you were gambling.

Perhaps gambling's biggest success was the lottery which financed the Continental army. These guys went on to win the revolutionary war against the British. 230 years later, veteran's clubs around America are being busted by police officers for violating low-stakes gambling laws.

Lizzie Magie created and patented a game in 1904 called the Landlord's Game. It was a game of buying and renting property, and was meant to educate people about the evils of land ownership.

Over the next twenty years, people localized the place names in the game as they carried copies with them across the country. Eventually the game made it to Atlantic City, New Jersey, where Esther Darrow played it an already localized Atlantic City copy at a game group and brought it home to her husband, Charles Darrow. Charles immediately took to the game.

With some friends, Charles added a few new rules and then pitched the game to Parker Brothers, who turned it into the Game of Monopoly.

Monopoly was about the only good thing going for America during the Great Depression. It's an icon of America that has spread around the world, with the rest of American culture following in its wake. Today, the very mention of the word board game brings to mind the game Monopoly.

What some people go though to play a game.

In fact, a new machine was essentially considered working only if previously existing games could be played on them. A little bit of irony for systems that were sold only for millions of dollars to serious businesses (and universities).

Ken Thompson was one such gamer who wanted to play his favorite game Space Travel on a bunch of new DEC systems. In the process of porting the game, Ken, along with Dennis Richie and a few others, invented Multics, UNICS, Unix, the B and C programming languages, and a few other nifty things. In the end, they got to play their game.

Their little side effects helped create the Internet and some of the most popular programming languages today.

Bobby Fischer is hardly a likable hero: he's apparently a primadonna, anti-semite, and conspiracy nut all rolled into one.

But in 1972, with the Cold War at it's height, Fischer was the man to beat the long-held communist Soviet dominance of the game. The Russians had long-touted the significance on the superiority of their players as a metaphor for communist's superiority over Western thought. Chess players were given large stipends, and the game held an elite status.

The Soviets were so distressed when Spassky began losing that they tried to recall him from the match early and claim victory. Spassky refused.

The political fall out of this match was that Russia clamped down hard on its players, reduced their stipends, and solidified its Iron Curtain policies. In America, there was much ballyhooing and a huge rise in interest for the game.

The unknown is fearful to some people. It doesn't help when you also shroud the unknown with descriptions of devils and pictures of half-naked women and then sell the material to children. Such was the case of Dungeons and Dragons in the late 1970s.

Already beginning to arouse the suspicions of religious fundamentalists, the news media ran the first of what was to become a time-honored tradition of blaming games for the behavior of the psychotic kids who happened to play them. In this game of Haven't Got a Clue, it was James Egbert, with a bottle of Quaaludes, in the steam tunnels under Michigan State University.

The private investigator who went looking for James decided that the suicide attempt was a case of gaming gone wrong. The facts came too late to help, and by the time it was over, there was a book, a really, really bad movie with Tom Hanks, and a new class of articles for lazy and clueless media journalists.

It wasn't the first time that a machine had beaten a human in a game. Heck, even animals have beaten humans in games, if you count the gladiators in ancient Rome.

However, it was a highly complex mental game and it was against the world's best player.

In truth, the game was just a wee bit rigged. Deep Blue had been programmed specifically to beat Kasparov's style of play; it knew every game on record that he had ever played. But Kasparov was not allowed to look at the games that Deep Blue had played. Which hardly seems fair to me.

A game that can easily defeat a specific human but not necessarily other isn't exactly intelligent. Especially since, if you change a simple rule of the game, such as how a knight moves, the game will crash and burn.

Still, even Kasparov seems to feel that this match was the beginning of the end for human dominance in mind games on this planet. A few years later, the best Chess games were essentially able to beat any human player, and programmers began turning to more interesting problems, like a decent computer Go player. Even Go is simply a matter of time at this point.

The end result is a diminished sense of naked human capability. Sure, we're the ones who built the computers, so, in a sense, it was still a human versus human match. But now its a given that humans strapped to artificial assistance are more capable than humans alone.