How much is the standard amount of money in a Monopoly game? How long could you hang upside-down and play a game of Monopoly? What did people insert into Monopoly Game boards smuggled into POW camps during World War II? Answers to these questions are featured in Monopoly: An American Icon a display that opens next week at the National Museum of Play at The Strong. Rare and historic versions of Monopoly tell the surprising story of one of America’s favorite games. Growing up, I associated Monopoly with financial independence and patience—two things I lacked. However, I loved the intricate pewter Dumbo piece in my Disney Monopoly set. And who wouldn’t want to put a stake in the Princes’ palaces across the board, or cozy up in tiny cottages? Today, I associate this game with good story and for more than a century, Monopoly’s exhibited numerous plot twists. 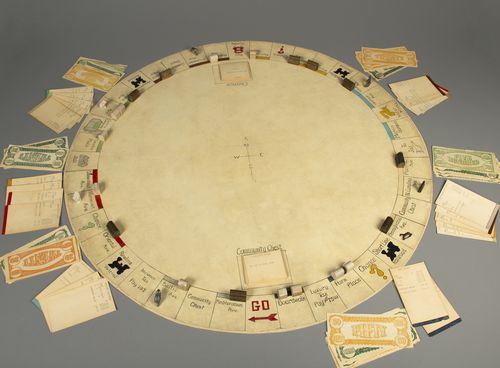 The story of monopoly begins in 1904 when Elizabeth “Lizzie” Magie, who hoped to publicize the social pitfalls of unequal wealth among people, patented The Landlord’s Game. Her goal, to show the evils of private land ownership, took a radical twist when players greedily collected huge piles of money and property, delighting in opponents’ financial troubles. College students soon played the game with different rules—the richest player won and everyone else lost. Around 1913, John Heap, a civil engineer working for the Pennsylvania Railroad in Altoona, made a Monopoly game. Heap’s folk art set reflects an engineer’s meticulous design and skills. It also presents an endearing side of game play—the board portrays his home town, with still-existing streets marked in pen, and postcards showing local landmarks. Little did Heap know that his game would serve as critical piece of evidence in a Monopoly trademark dispute that began in 1974 and spanned a decade. In 1933 members of a Philadelphia Quaker game group taught Charles Darrow, an unemployed plumber, how to play Monopoly. According to legend, Darrow soon created his own set, including a round board designed to fit his dining room table. Darrow drew and painted the oilcloth board and produced the paper property cards. The family added their own favorite charms or figures to use as tokens. In search of an income, Darrow produced 5,000 additional copies of Monopoly at his own expense. A friend printed the lines on the board; Darrow and his family hand-colored them and typed the cards. They used wood molding to make the houses and rolled the board rolled around a dowel. Adding a printed label to boxes used for selling neckties, Darrow peddled the games at Philadelphia’s Wanamaker’s department store, Gimbels, and FAO Schwarz. After Parker Brothers noted the buzz and picked up the game, sales skyrocketed. By 1936 the company could barely meet demand. Over the years, game developers reworked Monopoly settings for 81 countries and 27 languages. Monopoly spawned variations and spin-offs that celebrate game shows and films, cartoon characters, sports, heroes, and superheroes. According to Hasbro (which acquired Parker Brothers in 1991), more than six billion little green houses and 2.25 billion red hotels have been “constructed” since 1935. Each piece preserves years of social values, economic means, and landscapes.