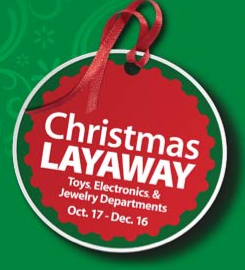 If you think that Wal-Mart’s toy sales are looking a lot stronger than Target’s this year wait until December.  Wal-Mart is going to clobber Target and here is why:  Layaway.

First, for those unfamiliar with how Layaway works here is a good definition from our friends at Wikipedia:

Layaway is a way to purchase an item without paying the entire cost at once. However, rather than taking the item home and … the layaway customer does not receive the item until it is completely paid for…If the transaction is not completed, the item is returned to stock and the customer's money is returned minus a fee.

Wal-Mart, unlike Kmart and Toys R Us, did not provide a lay away option last year.  This year they did and it is going to have a major impact on other retailers and particularly Target.  Here is why:  A great number of Wal-Mart customers chose the lay away option this year and for that reason sales that might have been reported in October or November will be reported in December instead.

Why the shift, because in the past, a shopper would have to purchase high demand toys early (September, October or November) in order to get them before they ran out.  With Layaway, many of those same shoppers were able to make sure they got the product they wanted but not have to pay for it until they picked it up.   The deadline for pickup in Wal-Mart is December 16.  (By the way, you don’t want to visit a Wal-Mart on the 16th; it is going to be crazy).

This creates two big problems for Target.  One, Target lost sales to Wal-Mart because customers, who were short of cash or credit, moved their purchase from Target to Wal-Mart in order to postpone paying for the product.  Two, Wal-Mart postponed recording the sales to December so when they do show up as a big bubble in December, Target is going to look even worse to investors in comparison to their number one rival.

Target made a mistake by not offering a lay away option this year.  They might want to rethink that decision for 2013.