You may have seen this article published in the Chicago Tribune last Thursday, November 24th, entitled "Here's the Scoop on the Most Stupid Toy in the World" by John Kass in which he blasts our Doggie Doo Game. 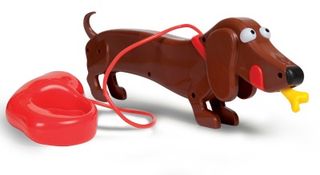 We did, and we felt it deserved a response:

I was horrified and disappointed to read your review of my game Doggie Doo in your November 24th column titled, “Here's the scoop on the Most Stupid Toy in the World.”

I think where you most completely miss the mark is in your desire to deny children the opportunity to laugh, smile, and be happy. I would say with strong conviction that flatulence and poop have made kids cut up since prehistoric times. Simply put, people enjoy playing this game and have fun, and I'm not going to apologize for that.

You’re absolutely right when you state, ‘The only question when it comes to toys is: "Is it fun to play with?"’ And to that end, I ask you, have you played with the Doggie Doo Game? Have you watched a group of kids play with it? Have you seen the delight on their faces and heard the uncontrollable laughter as they pump the dog’s leash? We have. They love it. It’s an awesome toy and a FUN game.

I’m not the only one who thinks this game is hilarious and entertaining. It was one of the hottest games in Germany last holiday season and won the Game of the Year Award in France this year. And, as of Monday November 21, Doggie Doo ranked #5 among the hottest selling games on Amazon. It’s not just us. This game is fun.

While you’re right that Chicago is the birthplace of many iconic toys and games, you neglected to mention such gems as Fireball Island, Tumble Time Tigger, UNO Roboto, Vac Man, Baby Alive Sip n Slurp, Luminator Sports Balls, and TMX Elmo. All of those toys came from Lund and Company and they are just a fraction of the contributions we have made to the children of the world over the past 25 years.
Rather than being embarrassed that Chicago is the birthplace to Doggie Doo, you should be embarrassed that you use your column to make snide remarks about a Chicago company that is growing, contributing to the community, and putting Chicagoans to work.

My advice for you in future is not to write about things you don’t understand, or at least haven’t tried. How about this? I’ll send you a Doggie Doo Game, and you see if you can play it without cracking a smile. I’ve got $15 per pump that says you can’t.