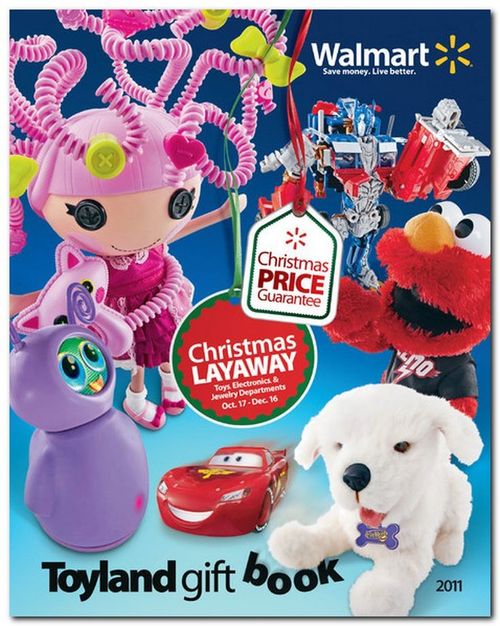 The gender critiques I have been doing on mass market retail chain toy catalogs (click here to read the critiques on Target, Kmart and Sears) are beginning to reveal a pattern.   As a result, I have decided to do critiques of the Wal-Mart and Toys R Us catalogs as well.  Once I am complete, I will be doing an article that analyzes the results and what they may or may not tell us about the toy industry and  gender.

In these critiques, I have  been looking to see whether the toy industry, by its marketing, is sending subliminal messages to children that may actually be bad for business.  As importantly, are we as an industry in sync with how today’s children see the world?  In other words, is the toy industry looking at 21st century kids through 20th century glasses?

So how did Wal-Mart do?  It appears that the Wal-Mart toy catalog, like those of Kmart and Sears, is far more oriented towards boys than girls.

Not only is the ratio of boys to girls heavilly skewed but the depiction of girls is sterotypical.  Take ride-on cars as an example.  There are 7 pictures of ride-on cars in the catalog and all but one is driven by a boy.  (The one with the girl is in the girl’s section while the boys are all on one page).

And it’s not just ride ons; its vehicles of all kinds.  I counted a total of 10 wheeled vehicles on which one rides (bicycles, scooters, cars, etc.).   Of these 10, 9 were driven by boys and 1 by a girl.  Talk about an old school view of gender and toys.

If I were a girl, I believe the message I would be getting is that the Wal-Mart toy catalog is primarily for boys and that, as a girl, they think that I am only interested in traditional girl toys like dolls and stuffed animals.  Simply put toys that are active and challenging are simply not meant for me.  I would shop elsewhere.