Sell, sell sell! Nothing happens until someone sells something (an IBM mantra). Inventing, creating, tooling, producing, shipping – no matter how clever the product, none of it matters unless someone sells it. 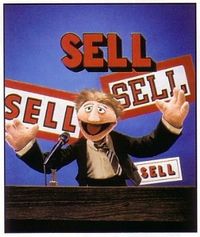 I am sometimes remiss in my sales efforts, ignoring perhaps smaller and potentially important toy manufacturers in favor of the fewer and larger companies. The smaller companies often do the best job selling a product when they throw their heart and soul behind it. Examples of this are everywhere – Marchon with Key Cars, Schaper with Stompers, and on, and on, and on.

We spoke with one of the second-tier toy buyer teams in Dallas last week. They purchase toys for almost 70 large stores and they were very busy with 32 meetings in one day between the two of them. In total they may saw the product offerings of 50 or more companies at the Dallas Market Center. Impressive, indeed. But what of all the other toy companies in attendance offering their wares? The others have no chance of their toys being offered in these 70 or so stores, as they were not even seen.

A team of two buyers may not be able to review the offerings of 200+ toy companies, but I cannot help but feel that something very cool, something of interest to the customers of those stores will not be offered because so many companies failed to reach out to these important buyers. How could so many not even attempt to schedule a presentation? Can it be that a chain of 70 stores with large toy departments carrying all of the major brands is not important enough to all these other companies for them to make contact? Perhaps not. They are 1/10th the size of Toys R Us in the US, and smaller still compared to Walmart. But – 70 toy departments! I would want my products in those stores. Leave no stone unturned! Success can be like a quilt, sewn together of many small pieces, not just one large swath of cloth.

That reminds me, by the way, that I need to get on the phones, get on a plane, and go sell, sell, sell, as well. Leave no stone unturned. There is no retailer too small. No chain of 70 large toy departments should be ignored, in my humble opinion, by any toy company at the Dallas Toy Show.

I best get out there and sell. I hope you do, as well. Best of luck to us all, but realize of course, that good luck and hard work are strongly associated with one another.