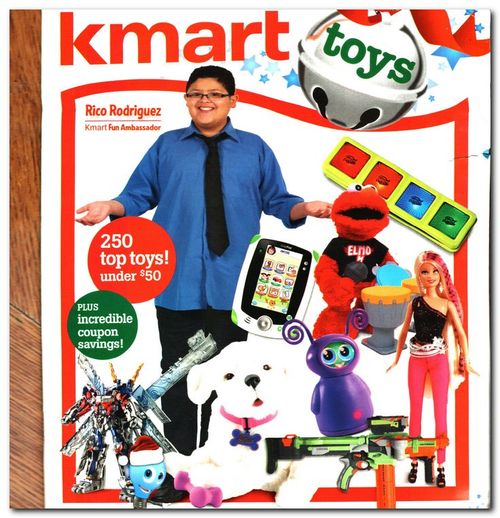 I recently wrote a gender critique of the Target toy catalog.  I looked at how girls and boys were presented Vis a Vis the various types of toys presented. My purpose in these critiques is to see if the toy industry stereotypes children by gender;  and if so to what degree and with what consequences.

There is any number of reasons to inquire about this from both societal and business points of view.  Where these two converge, at least for me, is whether the industry has, at least in part, created age compression by marketing to girls in a manner that is more in touch with 20th century attitudes than those of the 21st century in which these girls actually live. In other words, does the industry inadvertently work against its own interests?

My review of the Kmart catalog revealed an overwhelming orientation towards boys.  Of the 67 photographs of children in the book, 44 were of boys and 23 were of girls.  What was odd was that in flipping through the same catalog prior to my count, I had an even greater sense of a boy orientation; but why?  One reason may be that when girls are depicted they are either clustered on a page or are depicted with boys.  So, I counted up the number of pages only depicting boys and the number of pages only depicting girls.  22 pages only showed boys and 7 only showed girls.  In fact, you don’t see a girl until page 10.  Oddly, the doll section, which runs for 9 pages, only contained 2 pictures of girls.

Beyond the numbers, I found some (at least to me) odd gender presentations.  Pages 24 and 25 are devoted to radio control vehicles.  There are two boys and one girl depicted on those pages.  The two boys are actively playing with remote controls.   The girl is…………reading a book.  Yes, reading a book.  She is depicted in a comparatively large picture looking like she fell out of a library and onto the RC page.   Why is she there?  Was someone trying to do some balancing and had no other pictures?  In the same mode, on page 33 is a picture of a boy using a vacuum cleaner.  Is this an instance of gender neutrality and if so, why in a cataglo that is so overwhelmingly male?

In my next posting, I critique Kmart’s sister company, Sears.