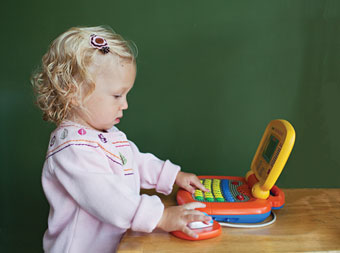 I recently critiqued the Target 2011 Toy Catalog (see "The 2011 Target Toy Catalog; a gender critique") from a gender perspective.  In doing so, it was noteworthy that the section containing technology toys was by far the most gender neutral.

It is interesting to ponder why this is.  In order to find out, I reviewed a survey on how children play conducted by the AIJU The Toy Research Institute.  The survey looked at children’s play patterns, not from the traditional gender perspective, but from the perspective of what toys the children actually chose to play with.

By doing so, they were able to drop the traditional binary boy / girl choice and divide children into seven social profiles:  Princesses, Feminines, Sporties, Naturals, TV Adventurers, Tots and Technologicals.  If you would like further information on these groups click here.

What was noteworthy was that the Technologicals group broke out into 56% boys and 44% girls.  With the exception of the Tots category, it was the most evenly split of any group.

Perhaps those who prepare these ads have data that discloses this information and the gender neutral stance is reflective of how children play.  On the other hand, it could also be that technological based toys are not encumbered, as are traditional toys, with 150 years of gender marketing.

Whatever the reason, it raises the question of whether we as an industry default to easily to gender based marketing.  After all, technology toys started out as a male driven category.  Think of how many sales these companies would be losing now if the industry held on to that belief and presented these products as overwhelmingly boy?  Does it makes you wonder how many sales we are losing in other cate