When I was three, my parents brought me to EPCOT Center, the home of SMRT-1, a purple and chrome robot surrounded by telephones. SMRT-1 challenged guests on the other end of the phone to trivia and guessing games. When I picked up the phone, SMRT-1 asked me for my name. I responded and in turn, he said, “Hi Michelle.” I frantically waved back at him. I know, with today’s technologies (Hi Siri) it seems ridiculous to get excited over this, but it was the 1980s. And as an only child with more than a figment of an imagination, I believed my toys possessed the same senses and range of emotions as humans. I’m not alone. Toy manufacturers continue to personify inanimate objects, and I think it’s because these traits pull at our heartstrings. 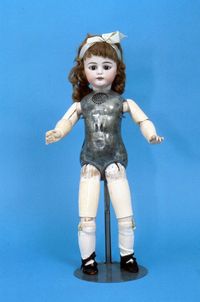 In the late 1800s, Thomas Edison fitted a bisque head on a metal torso and placed inside a teeny Edison phonograph with a cylinder and a recording of nursery rhymes. The Edison Toy Phonograph Manufacturing Company employed 500 people to work on the doll and it took half of them to make each doll. Patrick Feastor, historian of the early phonograph, noted that “this was the first case of a professional recording for an audience.” Imagine the excitement of the little kids whose parents spent 10 dollars to purchase one of these dolls! Sadly, the novelty wore off quickly. The record featured the sweet voices of little girl factory workers, but the actual pops and hisses of the early phonograph caused disturbing interruptions. In addition, the steel stylus tore up the wax cylinders and the mechanism proved too difficult for a child to manage. Edison himself said, “the voices of the little monsters were exceedingly unpleasant to hear.” Weighing in at 4 lbs, the doll was indeed a monster. Since Mattel introduced Barbie in 1959, she’s been one of America’s favorite dolls. However, Barbie’s chipper voice lent her some fickle friends, as well. In 1992, Mattel released Teen Talk Barbie. Each doll said four out of 270 possible phrases including “Will we ever have enough clothes?” and “Math class is tough!” The last phrase caught the attention of the Barbie Liberation Organization, a group of artists, parents, feminists, and anti-war activists concerned with gender-based stereotyping. The group embarked on a mission to switch the Teen Talk Barbie voice box with that of G.I. Joe’s for as many dolls as possible. Mission complete. The Teen Talk Barbie boxes in The Strong’s collection all read “What special things will I say to you?” It’s special alright for a Barbie in one of the boxes. If you push a button on her torso, she says, “troops attack” and “intercept that Cobra tank,” among others. I’m not that impressed with 1972 Busy Talking Ken’s recitations either. He says, “help me pack for my vacation.” Really Ken? With those orange pants, I assumed you knew how to dress yourself just fine. It took less time for Sesame Street’s Elmo to find his voice. After a few episodes, Sesame Street charged Richard Hunt to fill in for Brian Muehl’s little Elmo voice. Hunt, who originated Statler, a crass man seated in the balcony of the Muppet Show, did not bond with Elmo. While in the green room, Hunt threw the Elmo Muppet at Kevin Clash and told him to “get it a voice.” In his book, Clash reminiscences, “Once upon a time, a young man was given a special but unusual set of gifts: a fuzzy mop of cherry-red fur, crowned with two enormous eyes, which set atop an orange egg of a nose….” More than 20 years later, Clash continues to perform as Elmo. Every time I hear that fuzzy little red monster talk in third person, I envision Clash is no longer just the man behind the Muppet, but is the heart of Elmo himself.

As much as I loved SMRT-1, sometimes the fun resides in attributing your own voice to a character. As a kid, I imagined that my teddy bear Hershey sounded like Christopher Hewitt in Mr. Belvedere. I’m curious to hear what voice you gave to your favorite toy.