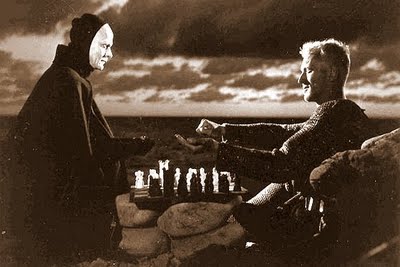 Games and toys frequently show up in novels, poems and films.  In some cases they are essential to the plot structure.  Today I want to focus on games.  It seems particularly timely as we are seeing a growing presence for games in book stores.  Even though much of this is driven out of the need for additional revenue to make up for the business lost to eBooks, it seems to me that books and games go hand in hand.  They both, when well designed, fully engage the mind.  As to the heart; I guess that depends upon who is sitting on the other side of the game board.

In that spirit, I decided to create a list of notable novels, poems and films that feature games as essential to the plot.  Here they are in alphabetical order.

One of this book’s most notable scenes is the manic croquet game that features living playing cards.  The Queen of Hearts with her shouted “Off with her head!” is one of literature’s more remarkable characters.

Set on Mars or Barsoom as Burroughs calls it, the creatures of that planet play their own version of Chess called Jetan.  The Jetan board has 100 squares and 20 pieces.  The squares and the pieces come in black and orange.  Burroughs actually detailed how the various pieces moved so it is actually possible to play a game.

A brilliant young man thinks he has been asked to play a video game but in actuality he is fighting a race of interstellar creatures that look like insects.

Harry Potter and his friends become players on a giant chess board…and they win.

A very unsettling picture book, which was turned into a movie, tells the story of children trapped into playing what they think is a board game but one that engages real life, danger and even death.

Themes of card games as metaphor for life pop up frequently in literature.  Austin uses the seemingly now extinct game of Speculation as a way of illuminating games of romantic intrigue.

The Golden Bowl features a series of Bridge games in which the throw of the cards provides a codified message for the secret relationship between two of the players.

The Rape of the Lock; Alexander Pope

A young woman plays Ombre, a card game that was popular a couple hundred years ago, with two suitors.  The game, which is played throughout the poem, is a metaphor for the real world game of love.

Set in medieval times, the movie features a chess game between a knight and death.  The game becomes a wonderful metaphor.

J. Henry Waugh has created a highly complex dice baseball game.  His dice rolls can result in hits, runs, errors and even death.  The novel moves between Waugh’s world and that of the players in an imaginary league where fate is fully in his hands.  A must read for any game inventor.

What books, movies or poems would you include?