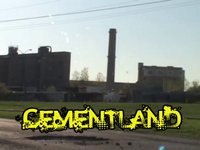 Bob Cassilly is the creator of Cementland.  He was the world’s biggest and coolest little boy.  I say "was" because unfortunately for all of us he  died late last month.  You may not have heard of him, although if you are from St. Louis you certainly did.  Bob was one of the most creative play space innovators ever to walk the earth and it was in part because he never lost his sense of childhood wonder.

Here is how The New York Times described the City Museum he created from an abandoned shoe factory:

In 1983, he bought a 250,000-square-foot building complex housing a shoe factory in downtown St. Louis for 69 cents a square foot. He stuffed it with wonders like a five-story jungle gym partly built from the carcasses of two jet airplanes and a fire truck; a walk-through whale; a rooftop Ferris wheel; a circus; an aquarium; caves; a shoelace factory; what Mr. Cassilly claimed is the world’s largest No. 2 pencil; and a collection of skateboard ramps where children could do everything but use skateboards. It opened as City Museum in 1997.

A walk through whale; How cool is that!

He died while working on his latest concept:  Cementland.  Yes, I said Cementland.  It was appropriately being created from the remains of an abandoned cement factory.  His vision included allowing people to throw rocks from the top of the 225 foot abandoned chimney.  As The New York Times described it, kids and adults would be able to “…ride in a boat from the top of a silo along a winding water chute four-fifths of a mile long before dropping into a lake. There would be a castle, mazes of moats, tunnels and perhaps a pyramid. Rusted machinery scattered on the grounds would be set in random motion for no apparent purpose.”

Bob died on the job.  He loved bulldozers and was on one when it flipped over on him while working on Cementland.  He was at the controls when they found him.

The world is a poorer place without Bob Cassilly but it is hoped that some of those kids who got to throw rocks off the top of the chimney or clamber through that whale will be inspired and carry on his vision.  Thanks Bob.