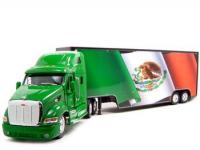 It was a surprisingly small article in the New York Times.  Tucked away under “National Briefings,” the headline read:  “Texas:  First Mexican Truck Enters U.S. Under Nafta.”

It’s a small headline for a much bigger story, the ability of trucks originating in Mexico to make the full journey to American and Canadian destinations.  This right, like that enjoyed by Canadian truckers since the inception of the Nafta agreement, means that Mexican trucks no longer have to stop at the border and shift to American tractors.

It will be interesting to see how big an impact this has on manufacturers choosing to produce in Mexico.  Lest you think that logistics is inconsequential, just remember that it was the invention of containerized freight 60 years ago that played a big part in the globalization of trade.

Here is how The New York Times described the impact in the obituary last month of Keith Tantlinger who played an essential part in the rise of containerized freight:

Nearly six decades ago, Keith W. Tantlinger built a box — or, more accurately, the corners of a box. It was a seemingly small invention, but a vital one: it set in motion a chain of events that changed the way people buy and sell things, transformed the means by which nations do business and ultimately gave rise to the present-day global economy.

Will that truck crossing the Mexican border into the US have such an impact?  Of course not, but it could make it easier to do business with Mexican companies and that, at a time of rising costs in China, could be highly significant.