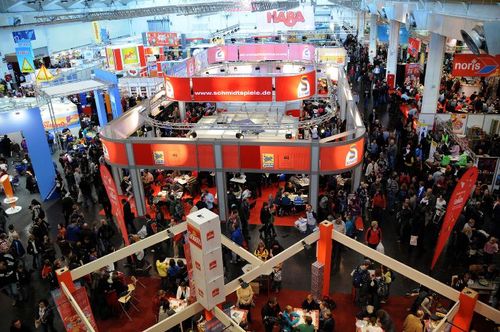 Followers of this blog will already know that, every February, the world descends on New York City to take part in New York Toy Fair. While similar toy fairs exist throughout the calendar and around the globe, New York remains the largest and most important trade show for the global toy industry (although Richard Gottlieb can tell us if the recent China Toy Expo is beginning to challenge for this role).

As I write this, the equivalent fair for the global board game industry is taking place in Essen, Germany. Internationale Spieltage, or Essen Spiel as it's commonly called, began in 1983 and is now home to over 800 exhibitors from 34 countries. As with America's own ChiTAG, founded and run by fellow Global Toy News blogger Mary Couzin, Essen Spiel throws open its doors to the public, its 44,100 square feet of exhibition space teeming with 154,000 visitors over 4 days.

If you're interested in wrapping your head around the vibrancy and potential of the modern board game industry, Essen Spiel is the trade show to watch. Unlike most North American board game trade shows (ChiTAG being a notable exception), the audience is very demographically diverse – multi-generational, family oriented, with a fairly even gender balance. In short, Essen offers an early glimpse of what I referred to as "the land beyond the tipping point" in my previous When Games Explode articles.

As board games have grown in prominence around the world, the show has become increasingly international in scope. This year, 48% of the booths are occupied by companies from outside of Germany. As long-time attendee and commentator, Frank Schulte-Kulkmann notes: "If you go back for 15 years, nobody would have predicted the appearance of so many countries at the SPIEL, and today exhibitors come from quite exotic countries (at least in boardgaming terms) like Algeria, Ukraine, Japan, China, Taiwan, Korea. As last year had shown, especially the quota of publishers coming from Eastern Europe is getting stronger."

As he often does, Michael Hopf of Fachgruppe Spiel (German Game Sellers Association) provides a keynote speech, sharing some facts and figures regarding the current state of industry. According to his figures, sales for the first 6 months of 2011 are currently down 7% from last year's record-setting numbers, due in part to a 30% drop in the volatile collectible card game category (note that much of this has been offset by steady increases in other categories). Older titles such as Monopoly, Risk, and Clue, continue to make up a major part of the boardgames sales in Germany, just as they do here in North America. Last year's 7 Wonders was called out, however, as a strong seller with evergreen potential that could follow in the footsteps of other popular modern classics like Settlers of Catan. Having played it, I would have to agree although it may still feel a little intimidating or confusing to new players.

I've come up short in my effort to find a nice English-language introductory guide to Essen Spiel that's targeted to new audiences who may not be as familiar with the board game side of the industy. If anyone knows of one, please post a link in the comments. In the meantime, here's a link to some video footage of just a small handful of the many games currently being shown in Essen. Check back often over the course of the weekend — more videos are being added all the time.