(This series is being published on the Toy and Game Inventor Conference blog and they are just too good not to share here.)

We've been working with the Kunoichi team over the past year on social media, collateral and our Social Media at Play Conference (website and conference development). They aren't only innovative and insightful, but super knowledgeable about play – all types of play and play history. We thought it would 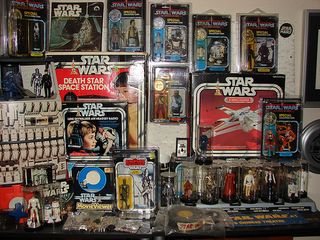 be great to have a series on toys/innovations that changed our industry. Brian Torney weighs in first.

Brian is a writer, consultant, Jedi Knight and Vice President of Kunoichi, a leading transmedia services provider for entertainment brands. A 7-year veteran of the toy, game, publishing and children’s entertainment industries, Brian ideates new and existing brands, connecting storytelling across multiple new and traditional media. These are not the droids you’re looking for.

Brian: Every so often a product comes along and changes the way we play. In 1977, Star Wars made dolls a bad word.

Chewbacca the Wookie shielded his eyes from the blazing Tatooine suns, striding high atop a sand-swept dune.  Only, it wasn’t a dune on Tatooine, it was a blue couch cushion, and the light was coming from a television set playing Return of the Jedi, not twin suns in a galaxy far, far away. Over the rise, Chewie found something that made him growl in mock defeat. The droids, the golden C3PO and trash can-shaped R2D2, clanked and pulled to a stop behind their furry companion. C3PO muttered under his breath, “goodness gracious.”

There, beyond the dune, stood two-dozen Storm Troopers, a contingent of grimy and grim bounty hunters, Jabba The Hut’s crew of mercenaries, and an odd mash up of random G.I. Joe villains thrown in to add scale and drama.  Blasters were cocked. A chicken-like AT-ST awkwardly turned its guns in the heroes’ direction. A Tie Fighter hovered in place.  A ferocious Rancor struggled to break its chain restraints. An Imperial Walker, AT-AT, lumbered just behind the Imperial troop squadrons.

R2D2 whistled and beeped as if to say, “things are not looking good.” It was as if time stopped in anticipation.

That’s when the unmistakable hiss of a Jedi Knight’s lightsaber igniting broke the silence! I started collecting Star Wars toys before I was even born. My dad snatched up ample amounts of action figures from Star Wars and The Empire Strikes Back in 1978 and 1980, knowing somehow that someday these toys would be vitally important to his son. At one-years-old my dad bought me a full set of Return of the Jedi action figures. He hunted them down at Toys R Us after Toys R Us. He left them packaged and complete, but had no intention that they stay that way. I can still remember the glee of unwrapping a massive AT-AT on Christmas. Yeah, my dad is awesome.

When Star Wars hit theaters in 1977, the property was unknown, a potential disaster for licensing and merchandise. After all the major toy manufacturers declined, Kenner, at the time owned by General Mills, took the license. If the license had shown more promise, Kenner might have aggressively leapt into production, but the manufacturer completely missed Star Wars summer release. Kenner wasn’t the only company predicting failure for Star Wars. Marvel Comics Editor In Chief Stan Lee declined the license, though editor Roy Thomas wisely chose to accept after a second, separate meeting was held. Thomas didn’t necessarily see magic in the Star Wars screenplay, which was at the time incomplete and described by studio executives as “unreadable”; Lucasfilm’s offer to rescind all payment and royalties probably weighed as the biggest factor in the decision. Twentieth Century Fox leadership also questioned the prospect of success for Star Wars. Fox Vice President of Creative Affairs Alan Ladd Jr. was fired prior to the release of the film.  As summer approached, Lucas’ film was over budget and carried few earmarks for success. The Planet of the Apes film series had been big hits for Fox, and 2001: A Space Odyssey had attracted viewer attention, but the space adventure cliffhanger serials (Buck Rogers, Flash Gordon) of the 1930s were long gone.

The summer of 1977 shocked everyone. Today, movies launch on thousands of screens around the world, but on May 25th, 1977, Star wars launched on only thirty-two theater screens, with eight more added for the weekend. Fox knew they had a hit on their hands in the first week when theaters publicized daylong sellouts. Within one week, Star Wars grossed an unheard of $6 million. In its initial theatrical run, Star Wars grossed over $300 million in the North American box office. Adjusted for inflation, Star Wars is the second highest grossing film of all time after Gone With The Wind.

Kenner scrambled, getting their act together enough to release the “Star Wars Early Bird Certificate Package” for Christmas. The “Certificate Package” amounted to an empty box redeemable months later when the actual action figures would be ready for release.

Kenner may have entered the game late, but Star Wars merchandise commanded urgent demand from fans and theatergoers. Kenner’s line of Star Wars action figures and vehicles changed the way toys were produced and marketed to boys. The birth of the 3¾ action figure line signaled a new and exciting mission of collectability for kids scouring toy aisle shelves.

Doll manufacturers Takara Tomy and Mego Corporation, which had would later reject the Star Wars license) created Microman (Micronauts) in 1972, releasing the first 3¾” action figure line. Microman was a creation of necessity; oil prices were on the rise and toy manufacturers could no longer afford to produce costly 8-12” dolls.

What Microman started, Star Wars expanded upon one hundred fold. Hundreds of Star Wars action figures were produced by Kenner. Popular vehicles like the Millennium Falcon, X-Wing fighter, Tie Fighter, Snow Speeder, AT-AT, and AT-ST saw release. Playsets like Cantina Adventure Set, Death Star Space Station, and Droid Factory were supplied as backdrops. If a child had a favorite background character, such as Walrus Man (because every kid loves Walrus Man), Kenner had a figure of that character on Toys R Us shelves. Epic, interstellar battle was possible. An expanded galaxy was not so far away.

Kenner halted their Star Wars line in 1985 after creating segments for Star Wars, The Empire Strikes Back, Return of the Jedi, and the post-trilogy Power of The Force. Ten years later, Power of The Force was relit, and Kenner, now owned by Hasbro, restarted the line. 3¾” scale Star Wars action figures are still produced today, encompassing all six Star Wars films, the animated film, both animated television series, The Ewoks animated series, the Droids animated series, numerous video games, and more. The galaxy is still expanding.

I’m not sure exactly what happened after Luke Skywalker ignited his green lightsaber on that sand-swept dune on Tatooine. I do remember Luke using his Jedi powers to knock the huge, dog-like AT-AT on the Imperial forces, but after that I imagine the cavalry arrived, Luke, Princess Leia, Han Solo, and Skiff Guard Disguise Lando Calrissian (I never did get a hold of the 1981 Lando in his regular outfit) charging in to the rescue. I also remember endless trips to resale shops and antique stores, digging through old toys to see if there were any loose Star Wars figures in the bunch. I remember watching Star Wars with all the neighborhood kids via a projector aimed at our garage door (my dad painted it white to project better, much to the rage of my mom). I remember wars with the neighborhood kids, trees in my front yard sitting in for the Ewok Village playset.

Every so often a product comes along and changes the way we play. In 1978, Star Wars bought a galaxy far, far away to my toy chest.

(About Kunoichi: They provide creative and interactive services for the toy and game industry. They have worked on big brands at Hasbro, Mattel, and LeapFrog, augmenting and supporting the staff teams. They are responsible for Hasbro and The Hub’s Adventure’s of Chuck and Friends and the recently launched Crib Life brand of girls dolls. It’s a boutique team offering a wide variety of services like packaging illustration and design, product design, IP Development, websites, mobile games, and Facebook. Visit Kunoichi.com for more information.)