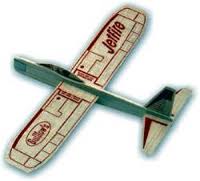 I was invited to a child’s birthday party a couple of weekends ago.  The child’s family and friends are affluent so, as you can imagine, there were some very nice and expensive toys given as gifts.  What particularly caught my eye was the Lego Star Wars Death Star which sells for $399.99 (isn’t the .99 kind of beyond the point once you get past $99.99?).

With all of this abundance, I was delighted to see that someone with more modest spending power had given a balsa wood airplane as a gift.  I think they bought it at a Dollar Store and I sat there mesmerized as the birthday boy spent an enormous amount of time and joy throwing the plane around the yard.  Pound for pound and penny for penny, it was absolutely the best play value at the party if not the most fun.  In fact, I would call that much fun for that little money "Play Power."

Balsa wood planes were certainly the delight of my childhood.  They never lasted long.  Hit the street nose

first a few times and that metal clip at the front would come loose and then eventually fall off.  Still, the thrill of gliding it just right off the hand, the sight of a sudden wind catching it under the wings and lofting it high and fast and seeing it come in for a gentle landing on the lawn is a  lifetime memory.

So I began wondering, what toys offer the most "Play Power" per penny.  That in my next posting.