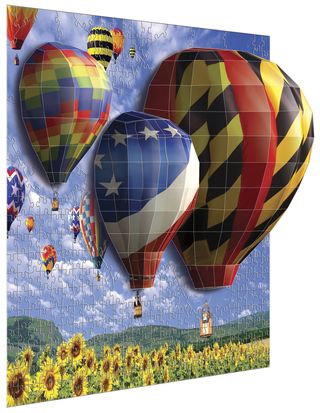 What will be wrapped and ready under the Christmas tree or nestled near the menorah this holiday season?

From the look of things at this year's Time to Play Holiday Showcase, those toys that make the final cut will not only have to satisfy kids' cravings for all things cool, collectible, quirky and technologically savvy, but meet gift-givers price-value expectations.

It comes as no surprise that price will figure significantly into purchasing decisions during the fourth quarter as retailers and toymakers alike come to terms with demographic trends such as "permanent frugality" and are devising ways to capture the spending dollars of these permanently frugal consumers.

Classic play patterns, kicked up a notch with innovative twists and turns, was one strategy woven throughout many of the new introductions. A personal favorite of mine was MEGA Puzzles' 3D Breakthrough Puzzles which unites the traditional flat-art jigsaw puzzle with real 3D technology. The background of either an easy, moderate or advanced two-dimensional puzzle is constructed first and then specially-designed clips are used to construct unique cardboard pieces into 3D components. Once completed, the eye-catching puzzles such as Spider-Man, hot air balloons and wolves can be displayed on the wall, mantel or tabletop.

Toymakers also gave fans of social media standouts a new way to interact with their faves. Annoying Orange and the Talking Kitchen Crew are being featured on plush, clip-ons and collectibles from The Bridge Direct Inc. A TV show is currently in production; a broadcast partner will be announced shortly.

Online UK imports Moshi Monsters make an appearance on a line of exclusive figures from Spin Master at Toys "R" Us for 4Q, while Angry Birds plan to perch on shelves with a Knock on Wood game from Mattel. The virtual world of Poptropica also heads to retail with customizable figures, 6-inch figures, plush and a 30-inch deluxe inflatable blimp from Jazwares.

Technology, both simple and complex, was spotted along the aisles with i-Star Entertainment debuting FyrFlyz, a spinning toy  on a string that creates unique lighted patterns and challenges kids 8 and up to perform tricks, shows and expand their imagination. Another fun and challenging toy is the updated 20Q electronic game from TechnoSource. A new feature button allows players to skip a question as well as an undo button if players change their mind. 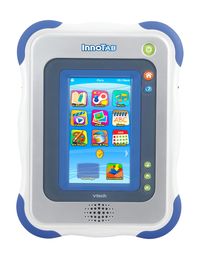 Richer technology can be found on the InnoTab which marks VTech's entry into the tablet market and combines reading, educational games, creative activities and a rich collection of applications for kids 4 to 9 years old. 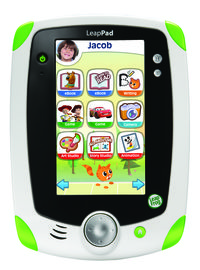 Upping its educational focus yet another time, LeapFrog debuts LeapPad, which is a personalized learning tablet for kids ages four and up complete with more than 100 learning games and apps, an on-board camera and video recorder. Kids will also enjoy playing with Oregon Scientific's Barbie Touch Screen Fashion Tablet which includes writing recognition, USB downloadable game content and touch screen.

Over at Disney Toys, the company created Cars AppMATes, a line of toys that come to life digitally when used with an Apple iPad, transforming the tablet's screen into a virtual playmate. The miniature Cars 2 vehicles contain special bases that are recognized by the app with no cable or Bluetooth connection required. The free app can be downloaded from the iTunes store. Silverlit kicks the R/C category up a notch with Head Shotz, a line of customizable, transforming battle ball toys designed to compete in head-to-head combat. Each comes with an infrared remote that allows kids to control their Head Shotz with high-speed spins, head butts and knockouts.

Lazer Stunt Chaser by Thinkway Toys will also appeal to radio-control fans as the high-speed, high-performance car is controlled by a patented laser light controller. The user can simply point the controller, press the trigger, and wherever the laser shines the car will follow. Kids can create their own obstacle courses using the four stunt sets that can be purchased separately. ·        It's game on this holiday with lots of fun for gamers of all ages. Ones to watch include Microsoft Studios' Kinect: Disneyland Adventures which lets players explore the park engage in quests and interact with characters as well as Kinect Sports: Season Two and Kinectimals Now with Bears!

The new Skylanders: Spyro's Adventure from Activision  lets gamers bring their toys to life when they place their action figures on the “Portal of Power,” instantly teleporting characters into a video game world. Players can then complete adventures, collect surprises and more that will be retained when their character leaves the game world. Upon reentering Skylanders, each character retains in-game experiences and can transfer weapons, skills and more across platforms when playing on a Wii, PlayStation 3, Xbox 360, PC or Mac.

For the toddler set comes Sesame Street: Once Upon a Monster. Created by Warner Bros. Interactive Entertainment, the Kinect for Xbox 360 game features active co-op gameplay and teaches social, emotional and life lessons.

Hoping to be kids' main squeeze this season are The Trash Pack from Moose Toys features tiny, squishy garbage-themed characters with names such as Mucky Maggot, Rankenstein, Smelly Sock and about 100 others kids can collect and trade. Collectors should also be on the lookout for ickee stikeez, a line of 24 squishy monsters from Zing Toys with suction cups that pop when dropped. Each blind pack comes with three figures and collectible coins with codes that can be entered online.

For girls, Playmates Toys created The Hearts For Hearts Girls, a line that features authentically dressed dolls, each with their own story of how they helped change and improve their community. A portion of the purchase price is donated to children's causes in that doll's country via non-profit partner World Vision.

Girls' will also embrace their creative side with new activity toys from The Maya Group including Orbeez Soothing Spa, Perfume Magic, Jewelry Maker and Light-Up Heart and Star. Each Orbeez  swells to more than 100 times their original size with the addition of water.

No doubt this holiday season will be challenging, yet with the innovative and fun products headed to retail shelves, one would hope it will be a very merry and profitable one.