In high school history, many of us learned that paper is one of the four great inventions of Ancient China. With today’s technologies and green movement, paper is getting a bad wrap … rap. But with all of its patterns and textures, paper inspires creative play. 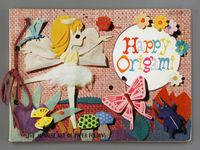 While at dinner with my parents when I was a kid, the waiter handed me a dollar bill shaped like a frog. I had that frog jumping over chowder and hiding under leafy garnishes throughout the meal. I later learned that origami is the Japanese art of folding paper into patterns and intricate sequences. Many historians believe that origami originated in the 17th century AD. At first, people reserved origami for ceremonial purposes because handmade paper was a luxury. By the late 1800s, mass-production led to affordable paper and origami became a popular art. Soon, published origami guides helped people to sculpt flat sheets into 3-dimensional art. In Vanessa Gould’s film Between the Folds, she credits artist Akira Yoshizaawa as the origami master who in the 1950s introduced to the global community a system of folding patterns. My go-to guide for techniques is Tatsuo Miyawaki’s 1964 Happy Origami: The Japanese Art of Paper Folding. Miyawaki’s design incorporates actual origami bound to the book’s whimsical cover and the subsequent pages. Miyawaki wrote several other origami guides—including tips to fold whales, butterflies, and tortoises. Another paper favorite of mine, the piñata, originated in Ancient China. For the New Year, people crafted piñatas shaped like cows or oxen and decorated them with the symbols and colors of a prosperous harvest. People filled their creations with five types of seeds and then hit them with sticks until the piñatas broke. They proceeded to burn the remains for good luck. Piñata Sundays had become common events in Europe by the 14th century, and the Spaniards had created the Dance of the Piñata. Today’s piñatas fall under the Mexican art called cartoneria—the making of items from paper and cardboard.

My grandma mastered this art by crafting piñatas as indestructible as the Terminator. Every winter when I was a kid, she spent hours constructing piñatas in the basement where she kept the supplies—newspapers, scissors, balloons, glue, carpe paper, etc. In the spring, she hung the piñata from a clothes line pole in the backyard.  My cousins and I took swings at it with a wooden baseball bat. When one of us was lucky enough to break through the layers, bits of colorful tissue-paper, pieces of candy, and small trinkets flew through the air like confetti. In the mid-19th century, a daintier paper toy, paper dolls, emerged showcasing stylish fashions. Magazines and newspapers offered pages of paper dolls for young readers, and manufacturers promoted their products with paper dolls that served as trade cards. A paper doll became an especially admired fashionista in the 20th century when chromolithography produced colorful wardrobes for the paper-thin model. In 1951, McCalls magazine, a popular periodical aimed at housewives, introduced Betsy McCall, a paper doll of a sweet young girl with many outfits and accessories. McCalls also distributed Betsy sets for mail-order sales. In 1955, the company offered a set that included Betsy, her parents, brother, and pet dog named Nosy. Although McCall's ran the last of the Betsy series in 1995, this gal remains a popular collector’s item. Many other paper dolls do too, including Shirley Temple, Velva Doll, The First Family, and That Girl. I’ve just started my own collection, which includes a Margot Tenebaums doll modeled after the film The Royal Tenebaums.

All these paper toys involve some amount of structure, but paper play is spontaneous too. Just grab a scrap and crumple, tear, or mark it and see what unfolds.