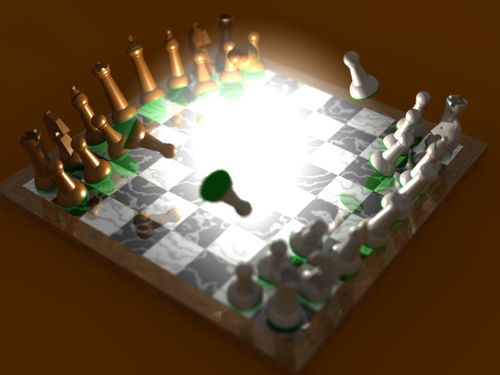 This is part 2 in a series of article by Rob Bartel.  Rob Bartel is a veteran designer and producer of video games with Electronic Arts’ BioWare studio.   Rob is uniquely qualified to write this series as he recently expanded into board game design with Two by Two, a light family game published by Valley Games. A passionate advocate for the board game industry, Rob helped found two national initiatives – the Game Artisans of Canada and the Canadian Heritage Collection. His newest endeavor is the Famous Games Company, an innovative provider of promotional card games for the sports marketing industry.

Part I of our When Games Explode series looked at the history of the video game industry. Public perception of video games shifted from being a novelty for adult tinkerers in 1972, to child’s play in 1985, to the genre-driven domain of teenagers in 1991, before finally reaching a tipping point in 2007 where it became a mainstream activity for people of all ages, genders, and backgrounds. After 13 years in the industry, most of the video games I developed are now unplayable on modern hardware. Board and card games are timeless, however, falling in and out of fashion on their own merits rather than as a byproduct of technological progress. Although the timelines differ, tangible games have followed a remarkably similar trajectory to that of video games.

While tangible games never benefited from the scientific novelty that drove the early phases of the video game industry, they did benefit from the steady rise in American leisure time in the late 19th and early 20th Centuries. In the 1830s, the average workweek was 70 hours. It had dropped to 60 by 1880, 50 by 1920, and our current level of 40 hours by 1935. Working class adults filled their newfound free time with inexpensive amusements such as board and card games. Founded in 1883, a game company called Parker Brothers sought to take advantage of this emerging trend. Whereas most parlor games of the day focused on teaching moral lessons to children, George Parker believed that games should be played for enjoyment and his designs focused on finding the fun in adult themes such as banking, the Klondike gold rush, the Spanish-American war in Cuba, and sports. During the Great Depression, a time when many similar companies went out of business, Parker Brothers was saved by a new game called Monopoly which became an immediate success. To date, the game has sold over 250 million copies and been played by more than one billion people. While today it’s primarily considered a child’s game, the original appeal lay with more adult audiences who harbored fears and fantasies about speculating on real estate, watching families members go to prison, seeing a wife take all of her husband’s assets and watching friends acquire wealth or slip into bankruptcy. Later Parker Brothers hits such as Clue in 1949 and Risk in 1957 continued to target the adult leisure market with universal themes involving murder mysteries and Napoleonic warfare.

Although the market for adult board games never suffered the same crash that was seen in the video game market, it nevertheless underwent a slow transition as publishers began to align themselves with the children’s toy industry. 1963 saw Parker Brothers and Monopoly sold to General Mills, a cereal manufacturer then in the process of diversifying into other play-based products such as Playdough and the Easy-Bake Oven. This shift towards a more child-oriented and toy-like approach to games is best seen in the remarkably successful work of Chicago inventor and impresario, Marvin Glass, who saw great promise in new technologies such as injection-molded plastic and the alkaline battery. His innovative design company, Marvin Glass & Associates, began in the toy industry with products like the clockwork “robot,” Mr. Machine. In 1963, they turned their attention to plastics-heavy boardgames and released the classic title Mouse Trap, where players construct a fully functioning Rube Goldberg contraption as they move their mice around an outer, Monopoly-style track. Their 1965 game, Operation, cast players in the role of surgeons earning money by extracting whimsical maladies from a clown-nosed patient – if their metal tweezers touched the electrified gameboard, the patient’s nose would light up and an alarm would sound. Rock ’Em Sock ’Em Robots, a dexterity-based game where players push buttons to control the fists of plastic robots in a boxing ring, was released in 1967. Wildly

successful and inventive hits such as these continued until Marvin’s death in 1974 by which point games and toys were seen as largely interchangeable product categories within the lucrative children’s market.

As in the teenage years of the video game industry, tangible games underwent a similar phase marked by significant gameplay innovations occurring within a very narrow thematic range of science fiction-, fanstasy- and horror-based settings. It began with the 1974 invention of Dungeons & Dragons, which launched the Role-Playing Game genre and, as of 2006, had generated over $1 billion in revenue. Its complex rules, lengthy playing time, and gladiatorial world of swords, magic, and monsters set it apart from its child-focused contemporaries. In 1983, British role-playing game company Games Workshop found international success with their similarly themed Warhammer Fantasy Battle Miniatures game. In 1993, another role-playing company called Wizards of the Coast invented the Collectible Card Game genre with their release of the massively successful Magic: The Gathering. The pattern continues with 2001′s Munchkin card game and the card game hit of 2008, Dominion.

In the digital world, Role-Playing Games would go on to inspire the Massively Multiplayer genre whereas Miniatures games would inspire the Real-Time Strategy genre. To some extent, the shift to casual video games in 2007 can be traced to the rise of card games and their smaller form factor. With their fantasy themes, intricate rules, and role-playing roots, however, Magic, Munchkin, and Dominion all clearly bear the mark of the teenage era and, regardless of their success, are not games that will bring their industry to the tipping point. Prior to 2007, the video games industry could always look to the earlier board and card games for inspiration but now, for the first time, the two industries suddenly find their roles reversed. It could be argued that the fast-paced video game industry has simply outpaced its slower cousin but the truth is far more interesting – the board and card game industry actually exists in an artificial state of suspended animation, trapped in its teenage phase for 37 years by a cannibal child. It can all be traced back to the 1983 crash of the video game market. Allow me to explain.

At the time of the 1983 crash, the two major American toy companies were Hasbro and Mattel, neither of which were yet involved in the world of board and card games. Mattel, however, had gotten involved in the video game market – their Intellivision console was a close competitor to the dominant Atari platforms of the day. When the crash came, Mattel withdrew from the video game industry to cut its losses and nurse its wounds. Emboldened by the sudden weakness of their primary competitor and seeing opportunity in the now very toy-like board game space, Hasbro embarked on a remarkable billion-dollar run of acquisitions. With an insatiable appetite, they ultimately gobbled up almost every major board game publisher in America, becoming the cannibal child referred to above. They acquired Milton Bradley, publisher of Marvin Glass’s Mouse Trap and Operation, in 1984. Five years later Hasbro acquired the holdings of Selchow & Righter, publisher of Scrabble, when they purchased the bankrupt video game company, Coleco, for $85 million. Parker Brothers, publishers of Monopoly, had gone through a series of acquisitions following their sale to General Mills, but Hasbro ultimately acquired the classic game company and all its titles for $486 million in 1991 by way of Tonka, a toy truck manufacturer that had fallen on hard times. Avalon Hill, publisher of adult-focused business, war and sports games since 1954, was acquired in 1998 for $6 million. Wizards of the Coast, publishers of Magic: The Gathering, had acquired the Dungeons & Dragons Role-Playing Game in 1997 for $25 million and were then purchased by Hasbro two years later for $325 million. In 2008, Hasbro acquired the adult-focused Trivial Pursuit for $80 million and Cranium, Inc. for $77 million. It is these acquisitions that have artificially extended the board and card game industry’s teenage years by continually clawing it back into the realm of childhood and stunting its ability to innovate, grow up, and reach its tipping point.

To be fair, Hasbro has some talented game inventors. In-house designer Craig Van Ness, for example, has done an excellent job of re-inventing many of their classic brands and external licenses for the teenage era. Likewise, their Family Game Night marketing campaign has attempted to break down age barriers and present games as a family activity, enjoyable by everyone. Their growing body of card games is beginning to mimic the portability, affordability, and quick play of post-tipping point digital games and is a step in the right direction. But, at their heart, Hasbro continues to be a toy company, pre-occupied with an increasingly age-compressed children’s market. Like many of their video game counterparts, Hasbro will struggle to remain competitive and relevant when the tipping point arrives for tangible games.

So About This Tipping Point…

Digital games have taken the lead, reaching their tipping point in 2007. I founded the Famous Games Company in the belief that the tangible games industry will follow suit beginning in late 2011 and into 2012. It’s a good theory but where are the facts? Find out in my final installment: When Games Explode – Part III: The Tipping Point.