As students return to the classroom, the former student and educator in me arouse mixed emotions. I watch reruns of such shows as My So Called Life, Freaks and Geeks, and The Wonder Years that remind me of the awkward high school cafeteria conversations, relationships, and wardrobes. I also return to the tattered pages of Richard Yates' short stories that I passed out with frivolous hope to the reluctant students in my Introduction to Lit course. But mostly, when I see the school bus drive by, I’m nostalgic for a few simple tools I do not use often in my adult life. 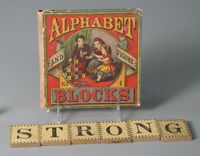 Recently, I helped my friend’s toddler use colorful alphabet blocks to spell words. His preferential treatment of the letter “e” became clear as he clapped and giggled when we spelled out ear and eight. Word and alphabet play have been a favorite pastime—so much so that in 2003, The Strong inducted alphabet blocks into the National Toy Hall of Fame. Alphabet blocks certainly possess longevity—a selection criteria for National Toy Hall of Fame inductees. In the late 19th century, toy makers sawed wooden blocks and embossed them with letters, numbers, and figures in low relief. Others used chromolithography on paper to print four-color illustrations on their ABC blocks. Early 20th-century Progressives stated that these educational alphabet blocks aided toddler’s hand-eye coordination and served as the first instruments for early childhood reading. As I watched my friend’s son toss, stack, tumble, and stumble over his own letters, I remembered my early fascination with alphabet blocks. Playing with my ABCs shaped my love of language. Coloring in between the lines has never been my forte, but I devoted countless study hall and lunch hours to Crayola products, sketching characters from my favorite books, album covers, and doodling in my notebooks. I thank Binney & Smith, creators of Crayola, for developing my appreciation for the color palate. In 1900, the pair, makers of red barn paint, ventured into the school supply business. Noting teachers’ complaints of poor quality chalk, the firm imagined a new market. Adapting a black grease pencil used to mark containers, Barney & Smith created handy multicolored non-toxic wax sticks and since then, art supplies and the color wheel have never been the same. Alice Binney combined the French word for chalk, craie, with olea, “oily” to make “Crayola,” and Crayola Crayons entered the market in 1903. At a nickel a box, kids snapped them up. Over the years, appealing new colors tracked fashion trends and cultural change. My favorites include Razzmatazz (1993) and Atomic Tangerine (1973). In 2001, Crayola Crayons joined alphabet blocks in The National Toy Hall of Fame.

The school’s cafeteria was a show and tell hot spot. I had what author Aimee Bender describes as “food envy.” I’d often find apples, cheese, and granola bars in my NERDS lunch box compared to my friends’ Doritos, Twix, and Hostess cakes. I preferred not to show and tell anyone about my lunch box’s contents. For others, the lunch box served as practice for later Wall Street traders, “I’ll split my Oreo if you bring me a Juicy Juice tomorrow and Friday.” The lunch box entered the school scene in 1950 when Aladdin Industries created the first children’s box featuring characters from the TV show “Hopalong Cassidy.” More than 600,000 kids owned a “Hoppy” within the first year of sales. Prior to the advent of pop culture lunch boxes, one option for packing a meal included the cardboard lunch box used during World War II. Herbert George Company promoted their Vita Kit Folding Lunch Box for “the War Worker—For the Office Worker—For School Children.” Not only did the cardboard lunch box save on previous metals used for the war effort, but it also came “complete with a folder containing vitamin-filled luncheon suggestions and recipes.”

Although I am no longer in school, I learn new things every day. And it’s clear, as I peek into my colleagues’ offices, that they agree—toys are vital sources to increase productivity, critical thinking skills, and creativity.

What is your favorite classroom toy?