Sometimes it pays to be lucky. If you stick at it long enough and work hard enough, luck can find you. This is not random luck, but luck that is the byproduct of diligence. Just as you can’t get lucky if you don’t buy lottery tickets, and the more you buy, the more likely you will be lucky, so it is with inventing. The more we create, the more likely luck with find us. Fingers crossed. 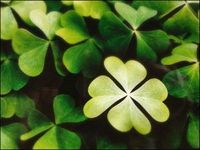 Some of the world's most famous inventions were created by luck. Coca Cola and Pepsi were created as medicinal remedies. Plastic was a failed attempt to synthesize shellac. Vulcanized rubber, which makes car tires possible along with a million other things, was an accidental spill that landed on a hot stove. Viagra was a failed attempt at developing a heart medicine. Chocolate chip cookies were an accident. The list goes on and on.

Those who get lucky have probably spent years of effort that put them in the position to be lucky. I knew a man down in North Carolina who, when he retired, lived a very comfortable life and even drove a Cadillac. An acquaintance of his remarked, "you sure are lucky," and he corrected him that it was not luck, but the result of working hard an entire lifetime and saving his money that allowed him to live comfortably in retirement. We at Lund and Company get lucky often. Sometimes we even make a discovery that completely suprises us. This happened just last week; we built something to do something and it did it! We don’t even know why it works or how it works, but it does work, brilliantly. I can’t tell you more, you understand, because it’s secret. This lucky discovery was the result of exploring a technology over a period of several years.

Generally, when we get lucky it is because we have been exploring a technology or product category for five years or more. That is the luck that one earns. Such was the case with TMX Elmo, which animated by a mechanism we created as a result of many years of inquiry into mechanisms, movement, timing, inertia, momentum, weight distributions and geometry.