Toy and Game Inventors of the Year Nominations are open. Here are the top four reasons to vote for your favorite inventors:

We all know how important play is to our culture and to our development as human beings.  Without the 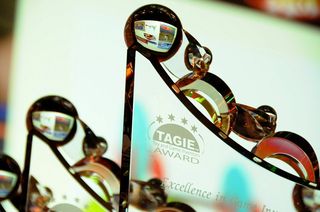 creators of the very games that drive this culture, where would we be?  The creators of successful toys and games SHOULD be recognized for their contributions.

Consider this:
Actors have Emmys and Oscars
Singers have Grammies.
Writers have Pulitzer, Edgar, Newberry, Hugo and more
Chefs have their restaurants and a plethora of food shows, awards, books, columns, etc.

You have heard me say many times that inventors are no different from these other artists. The creative processes are similar and they can help us fight for the consumer’s entertainment dollar.

That’s exactly why we created the Toy & Game Inventor of the Year Awards (TAGIE Awards) – To recognize toy and game inventors from around the world responsible for some of today’s hottest products, as well as those inventor greats who have stood out in the eyes of their toy industry colleagues for their exceptionally innovative spirit of creativity or humanitarianism. Our fourth annual TAGIE Awards Dinner will be held in Chicago on November 18th.    Once again, the  venue is the Museum of Science and Industry, all decked out for 2011 in Seussical splendor – from the private showing of the museum’s Dr. Seuss exhibit to the 40-foot high holiday tree to the whimsically delicious menu.

The TAGIEs sold out last year and people said we couldn’t top it … but we are!  This is a year not to be missed!

All toy industry professionals, including manufacturers, retailers, designers, etc., are invited to submit nominations at www.tagieawards.com.  Nominations must be received by September 20, 2011.  Award nominations will be tallied, with top nominees voted on by the general public beginning October 1, 2011. A HUGE thank you to our sponsors, without whom we could not put on this fabulous event: Hasbro (Presenting Sponsor), Spin Master, Hassenfeld Family Initiatives, LeapFrog, Zobmondo!, Joyce Johnson Designs, Oxford Games, Patch Products, and others.

So, nominate your favorite inventors now and we hope to see you in November!