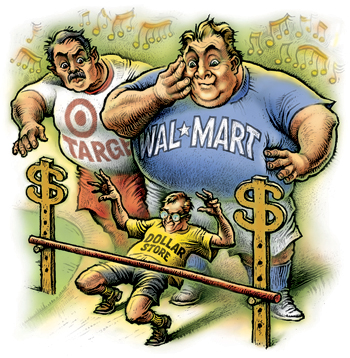 I strongly recommend that you read an outstanding long-form article in the August 21, 2011 New York Times Magazine.  The article sports two titles: “The Dollar-Store Economy” is the title of the on line edition and “The Buck Stops Here” leads the ink on paper version.  It is the former, however, that is more apt in describing the current mind-set of the American shopper who has money to spend but fears spending too much of it; frugality trumps desire.

Here is how the author, Jack Hitt, puts it:  “[T]he dollar store affords a low-rent version of the American Consumer Experience, a place where the poor can splurge. That’s true. But current developments in this, the low end of retail, suggest that a larger shift in the American consumer market is under way.”

The article does a very nice job of laying out the growing strength of the Dollar Store channel of trade.  The author includes in the category, everything is a dollar independents and chains like Dollar Tree as well as low cost, high value chains like Dollar General and Family Dollar.

Hitt notes that prior to 2008, these stores were shopped primarily by those on the economic margin but not anymore.  “…while it’s true that low-wage earners still make up the core of dollar-store customers (42 percent earn $30,000 or less), what has turned this sector into a nearly recession-proof corner of the economy is a new customer base.”

So who are these retailers and are we paying sufficient attention to them; that in my next posting?