I occasionally wonder what people think when I am introduced to them as a toy inventor. What image does that conjure up for them? The concepts of 'inventor' and 'basement' or 'garage' seem somehow linked. In film and TV inventors often seem to be society's misfits with bad hair and looney ideas. Am I wrong, or being over-sensitive? 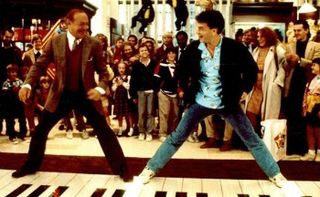 The concept of 'toy inventor', for people of a certain generation, is inextricably linked with Tom Hanks and the movie BIG, which, by the way, featured a stack of our Fireball Island games in the FAO Schwartz sequence. Fireball Island also appeared on a shelf in another movie just before the toy store blew up.

The comment that inevitably follows my introduction as a toy inventor is "Oh, that must be fun!" And indeed it is. But I often say that for most people this is the last thing in the world they would want to do and that they should run, not walk, away from a career in invention. That said, for a certain few, this is the only thing in the world that they should and could ever be doing. Like the world's greatest used car salesman said when asked about his secret of success, "You have to learn to love the word 'no'." It is very true for what we toy inventors do, too. We have to figure out each day and each week, each month and each year, what to do, what to make, what to invent, and what to create. Sometimes that is hard to do. Sometimes we choose better than at other times.

Then we invest our time, our blood, sweat and tears, and about a million dollars a year in creating products that we HOPE we can one day license to someone. We hope they will bring them to market, promote them, and sell hundreds of thousands of units, or millions, preferably.Some years it works well and some years we lose hundreds of thousands of dollars. Some products we sell in a week, but most take far longer to license, and some take us a decade or more to license. Many of our recent and upcoming products took us 15 years to sell. Some of our products sell millions of units and become cultural icons and others don’t sell one single unit. Ouch! 90% of what we create doesn’t ever sell and sits in our vault still, awaiting its shot at fame and glory. How’s that for a lot of 'Nos'? There have been a whole lot of disappointments over the years, which is precisely why this business is not for the faint of heart.

You have to love to hear the word 'No' because you have to hear it a lot before you can hear a 'Yes'. You have to be as persistant as wind and rain that carved out the Grand Canyon, grain by grain. Success over time is hard won and hard earned. This business is not for most people, but for others it fits just right.