New York winters keep two of my loves from venturing outdoors—my Dachshund Gilda and sports cars.  Every summer day in Rochester, New York, feels like a festive parade, as car collectors embrace the ideal weather for taking their babies out for a spin. This past weekend, I saw three unique cars on the open road and in The Strong’s National of Museum of Play collections. 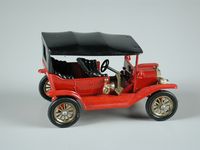 In Cannery Row, John Steinbeck declared, “Someone should write an erudite essay on the moral, physical, and esthetic effect of the Model T Ford on the American nation.” When in 1908 the Ford Motor Company produced the Model T and sold it at a price that nearly everyone could afford, the American sense of leisure changed forever. Nearly a half-century later, an engineer and partner at Lesney Products, crafted the first die-cast car model in a matchbox replica. Consumers eagerly purchased the first Matchbox 1-75 miniature series, and three years later, Lensey introduced The Models of Yesteryear. In the 1970s, when Lesney surveyed collectors’ needs and released several Yesteryear models for adult car aficionados, buyers especially admired the Y-1 Model T Ford.

As a kid, whenever I rode in my dad’s black 1979 Chevy Corvette, I felt like I was speeding through Gotham City in the Batmobile. This weekend, I spotted a first-generation 1962 Corvette and I instantly wanted to speed down Route 66 with Tod Stiles and Buz Murdock. The Corvette’s originator, Harley Earl, designed the car to provide Americans with a sports car like those he saw on European road racing circuits. Earl, a pioneer of freeform sketching and clay model design techniques, began working in secret on his project, which he dubbed Project Opel, and by 1953, Americans gawked at the Corvette. Chevy released only 300 hand-built Corvettes that year, so for many collectors Maistro’s die cast model  is as good as it gets. The red interior presents a sleek contrast to the white exterior. Later Corvettes and die cast models featured vacuum operated retractable headlights, but this model exhibits the traditional headlights. If I use my pinkie finger to steer the wheel, the tires spin and I can almost hear the engine roar. I will never forget when Marty McFly from the 1985 film Back to the Future first hit the pedal to the medal in Dr. Emmet Brown’s reprogrammed DeLorean. The DeLorean Motor Company (DMC) produced the first DeLorean at its Northern Ireland factory in 1981. This car presented a futuristic feeling with its gull-wing doors, stainless steel body (none were painted, with the exception of three cars plated in 24-Karat gold), and ability to go from 0-60 mph in 8.8 seconds.  DMC stopped production of the DeLorean in 1982 and, according to some sources, only 6,500 cars remain. For those of us who will never sit behind the wheel of a DeLorean, I recommend checking out the NES Back to the Future video game. In final game play, the player helps Marty race the DeLorean time machine through lightning bolts and other obstacles. Just remember Doc’s advice and hit 88 mph in the allotted time.

While I would happily drive one of the cars above, I still take great pride in my 1999 Honda Civic’s ability to hug turns and slide effortlessly into small places. If these cars aren’t your speed, check out The National Museum of Play’s other collectors’ cars at The Strong. There you’ll find Barbie’s 1962 Dream Car, a 1966 Speedway Pace Car, a 1999 Thunderbird, and even a 1955 Mars Car. And lots more.There’s a model for nearly everyone’s tastes.