Reuben Klamer is a legend in the toy industry.  He is one of our greatest toy inventors having created many successful toys.  Reuben is best known for The Game of Life, a member of the Toy Hall of Fame.   Reuben is also, I am proud to say, a friend of mine.  So, when I heard that his friend, Elliott Handler had passed away, I asked him to provide us with a remembrance.  Here it is: 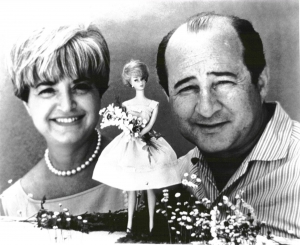 Elliot was a man of great depth who played a major part in the American and International toy industry.

Elliot was my idol. Everything that I have done in the industry stems from my deep respect and admiration of this wonderful man.

Elliot was mild mannered, soft spoken and a man of great inspiration.

The first time I saw Elliot was at an annual Mattel stockholder's meeting. He spoke and introduced his "ballerina doll."  Elliot said, and I quote him: "We are going to have a lot of fun with this one."  This is an example of his humble and easygoing manner.

In 1959 Elliot showed me the first Barbie doll on display for the first time at the New York Toy Fair. Little did I know that it would become a multi-billion dollar hit.

To my great pleasure, Elliot and I met for lunch annually for many years at the Hillcrest Country Club.

On another occasion, when I had invited Elliot for lunch at the Westwood Marquis Hotel, now the W Hotel, I asked his opinion of my new roller skate development, that Fisher Price now manufactures. Elliot handled the skate in his two hands and held it up and declared "if this is promoted on TV it will sell like hell." – Which it did!

I am so broken up by the loss of my dear friend and idol.  I will miss him greatly!