Sing-A-Ma-Jigs were a hot product last year and continue to be. It won three TOTYs at NYTF (Most Innovative, Top Preschool and overall Toy of the Year). Mattel acknowledged the inventor, Ron Magers of 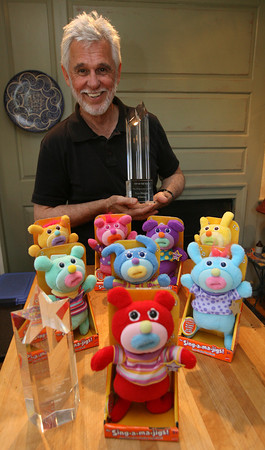 MDesign, in their acceptance speech. Innovation and a new brand can pay off big. I've known Ron for some years now and he always has a smile on his face, a kind word and is a classy guy. Like many in our industry, he also gives back to the community. He is currently involved in reshaping the 'Old Man' monument on a mountain top in NH. I asked Ron to share with us how Sing-A-Ma-Jigs came to be, a bit about his other inventions and why he is bringing the Old Man on the Mountain back to life.

Ron: Call it fun if you want but the toy business, unlike the success of the Duncan yoyo, has its up and downs and can often give a toy designer a bit of heartburn. We inventors know all too well that the time and effort that goes into the birth of an idea through to its conclusion and its promise of retail success, is fraught with the industry’s built in road bumps.

It always starts with the “this could be the one” idea. Then comes the excitement of the fantasy that your fledgling inspiration will soon be flooding the retail shelves across the land.  As brief as these inspirational moments are, most creative types will tell you is that the endorphins generated from the first “Aha” instant is where the FUN is. It’s that initial spark that often motivates one to undertake the challenging part. The development of their brainchild and make it something real you can hold in your hands. Sure, there’s always the argument that selling the idea and making enough money to pay the bills and keep your next inspirations funded is what it’s truly all about. True and let’s face it. Without the financial rewards, inspiration is really only a little imaginative smoke.

OK… Making it. Let’s give our baby life and start with the idea (is this really a viable product?), cost (is it too expensive?), prototype (is this doable?), model (whoops, make it again), styling (does this look dated?), testing (mmmm, not quite there yet), company presentation (angst), contract (what do you mean 3%?… and a bit more angst), sales (hope it does better than the advance).

Now, having said all of the above, I must say that having been connected to the toy business for as many years as the advent of the Nixon administration, I find it still can tweak my “inner child” as if it was always  recess and time to play.

Here’s a recent product story. Two years ago I was playing with a “hair scrunchy.” You know, the bright colored, fuzzy, elastic ones that little girls tie up their pony tails. I made a little mouth by slipping it over my forefinger and thumb and did my version of the “Senior Wences” routine and went jabbering around the office with some very favorable responses. And there it was… the “AHA” and “this could be the one”.

So… We took a small plush bear from the stock room and gave it a quick stuff-ectomy and put in its place a mechanical thumb and forefinger with the mouth scrunchy in place just under the nose. We could operate it by squeezing its belly every time we wanted the mouth to open and release it to close it. It worked so well that we just went ahead and made a total of three new working characters.  With the addition of a pink tongue and some baby teeth we were able to bring even more attention to the main “hook” of the product… the animated, scrunchy mouth.

Now these little characters needed to have a voice. With the help of a couple of my less bashful, musical friends, we went straight to the

computer and booted the GoldWave software and recorded each of their voices in perfect harmony. Then digitally “tricked up” the human vocals for a touch of whimsy. Now we had our sweet little chorus.  Our electronic engineer burned the chips and two AAA batteries brought the little guys to life. VOILA! The “Sing-A-Ma-Jigs” were born. We were using the working title of the “Jibber Jabbers” but Fisher Price’s team came up with “Sing-A-Ma-Jigs” – an example where the name really fits the product.

Me? In truth, I’m a frustrated fine artist and early on (very young with illusions of grandeur) I thought I’d be able to make it as an artist or sculptor. But with some reflection I knew I would need more than a slightly better than minimal talent if I were going to survive in a competitive art world. The picture of the “starving artist” was too scary.

However, I did have a bit of luck when I teamed up with my sculptor partner Shelly Bradbury and we entered a call for artists to create a memorial for the New Hampshire’s state symbol, “The Old Man of the Mountain” and won the commission. The first phase was unveiled on June 12, 2011. A big 30 foot granite arch and steel interactive monument with, wouldn’t you know it, a playful, toy like aspect to it. See it on the web site…. Old Man of the Mountain Legacy Fund. I’d like to think that while my toys may all disappear in time, this piece of sculpture up at Franconia Notch will be around for a long, long time.