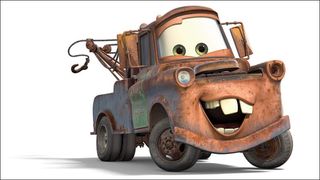 We were standing in line for Cars 2 when the six year old we were accompanying (or was he accompanying us) turned to me and said:  “I don’t want to see Cars 2.  It’s too much about Mater.  (Mater being the hillbilly character with the big buck teeth and heavy southern accent).”

I had just paid $60.00 for the four tickets so was by no means in any mood to hear such negative talk.  Well, let me tell you, about 30 minutes into the movie I was sitting there thinking, “The Kid is right.  Way too much Mater; way too much of everything for that matter…too many plots, too cute, too long.”

Don’t get me wrong.  There is much to admire in the playful and extremely clever cartoon cityscapes and crowd scenes.  It’s just that I kept having this feeling that the movie was too clearly about selling products and not enough about a coherent plotline.  I would sit there and think:” There’s a toy; whoop there’s a toy; yep, there’s another toy.”

So, it was with this in mind that I read a long form editorial on the front page the July 2, 2011 New York Times by James B. Stewart.  Entitled “A Collision of Creativity and Cash,” the article considers the conflict between Pixar’s historic dedication to storytelling and risk taking and Pixar’s owner, the Walt Disney Corporation’s dedication to building franchises.

Stewart noted Cars 2 this is the first critical failure that Pixar has ever produced.  On the other  hand, Disney ran its animation department into the ground before acquiring Pixar.  It was for this reason that many held their breath to see how Pixar would fare under Disney and it has actually fared quite well until this movie.

So, what went wrong?  According to Stewart, Pixar ultimately was consumed by franchise building and as a result we get a production that, according to Doug Creutz, an analyst at the Cowan Group, is “…created solely to drive merchandise.  It feels cynical.  Parents may feel they are watching a two hour commercial.”

It reminds me of a moment I had a number of years ago.  It was in the late 90’s and Disney had just enjoyed a string of hits with “Beauty and the Beast,”  “Lion King,” “Aladdin,” and more.  I had been invited over for dinner by some friends and sat in the living room with their five year old as my hosts got dinner ready for the table.   In order to make conversation with the child I innocently said something like, “Have you seen the new Pocahontas movie?”

Hearing me from the other room, the child’s mother flew into the room and exclaimed, “I am so tired of the toy industry setting us parents up every year.  You come out with a new movie and we know we have to go out and buy the doll and all the other crap that goes with it.  We’re tired of it.”

That episode startled me into some clarity regarding the difference between feeling you are part of a joyfully spontaneous experience and just being manipulated.  People enjoy being part of a phenomenon.  This need for authenticity, however, turns into anger when someone realizes that they are being manipulated.

At the time of my dinner party, Disney, despite its best intentions, had simply become too clockwork in delivering its movies.  People had begun to see neither themselves nor their child as in control of what had turned into an annual Disney promotion.

In the case of Cars 2, we may be seeing some of the same phenomenon.  A weak movie with some obvious merchandise tie-ins ends up being seen, rightly or wrongly, as a Creutz puts it, “a two hour advertisement.”  People are getting cranky.

But what difference does it really make that the movie is a critical failure if it does the box office?  After all, the movie raked in $66 million the first weekend which is good but not great compared to “Toy Story 3” and “Wall-E.”

Well, to the toy industry, maybe plenty; that in my next posting.