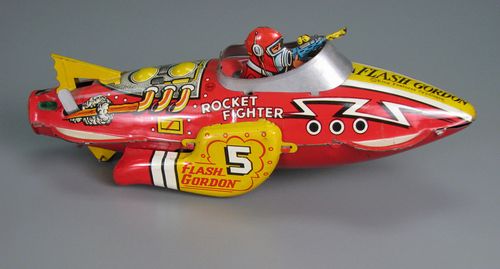 I recently wrote a blog posting on “cheap toys.”    In that posting I asked this question:  Is the word “cheap” attached to toys because they are simply inexpensive or is it because toys are generally perceived as “cheap” in the sense of lacking in value?”

In order to get a better feel for the use of the term “cheap toys,” I contacted Michelle Parnett of the Strong National Museum of Play.  Those of you who read Global Toy News know Michelle as one of our excellent bloggers so I was confident that she and the Strong could shed some light.

According to Michelle, the use of the term “cheap toys” actually predates World War II, the use of plastics and production in Asia.  Though she was not able to provide a definitive moment in time she did give me some leads on the use of “cheap” as a reference for toys.

The term was originally used to describe the toys of Louis Marx & Company.  The Marx Company made a point of producing toys that it boasted were not only better than those of other companies but cheaper.  Their motto was to “…give the customer more toy for less money.”

To understand the importance of Marx’s focus on lower prices it is necessary to appreciate that Marx was the Hasbro or Mattel of its time (1919-1978).   1919 was the year after World War I ended and Marx like other entrepreneurs was using the cut off of quality German toys due to the American embargo (85% of the world’s toys came from Germany prior to that war) as an opening to produce a new kind of toy; one that sought to maintain quality while lowering price.

Marx’s devotion to "cheap" plus better would have forced compeitors to copy its  business model in  in order to remain competitive.  These companies used mass production, mass marketing and cheaper materials (tin and later plastic instead of steel) as a way to drive down cost.  This ability to produce and purchase in mass quantities by the new national and regional retail chains (think F.W. Woolworth) led inexorably to a reduction in the costs of production and the use of price as a sales driver and differentiator.  This early emphasis on the term “cheap,’ though meant in a positive sense, would have caused the term “cheap toys” to have crept into usage.

Since that time, whether it was in the USA and later Japan, Taiwan, Hong Kong and now China, the push has been to pursue Marx’s vision of more value and less cost.  The hunt for “cheap” by Marx and others was well intended and many a child benefited from toys that would have been at one time unaffordable if not unavailable.

It seems, however, that what was a positive effort led to a hunt for the bottom in costing and a shift in the meaning of the word "cheap" from denoting lower cost to meaning cheaper quality.  As a result the toy industry has been saddled with a term that connotes low value rather than low cost.

So, what can the toy industry do to reverse that notion?  If you have some knowledge of the history of “cheap toys” or ideas on how to reverse the negative connotation of “cheap” write in and let us know.