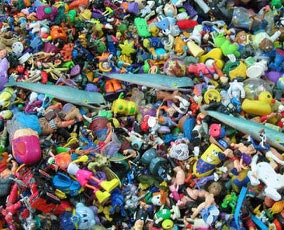 I was reading a New York TImes article, “Bridge Comes to San Francisco With a Made-In-China Label’ when my eyes caught this jarring sentence: “The [bridge] project is part of China's continual move up the global economic value chain – from cheap toys to Apple iPads to commercial jetliners…”  Couldn’t the writer, David Barboza, just say toys?  Did he have to refer to them as “cheap toys”?  After all, he didn’t say “Cheap Apple iPads.” They’re just iPads.

It does, however, give a sense of where the toy industry is relegated when it comes to producing value.  We don’t just come in at the bottom of the “economic value chain” but we are saddled with “cheap.”  Is the word “cheap” attached because in the beginning China did indeed produce only toys that were low value; is it because China’s production costs were so low they were in actuality cheap (and if that is the case, is the new bridge they are building a “cheap bridge”?) or is it because toys are generally perceived as “cheap” in the sense of lacking in value?

It caused me to think:  Are cheap toys and all toys somehow the same thing in the public’s mind?  Does the notion of cheap toys somehow devalue all toys?  Does an “expensive” toy have to overcome the onus of really being cheap?  Or is it like jewelry in which you can buy “cheap jewelry” and expensive jewelry.  Expensive jewelry simply does not have to overcome the negative references of the word “cheap.”

I wrote the article’s author, David Barboza, an email asking him to give me a sense of how he meant the reference.  In the meantime, I googled the words “cheap toys” and found that I got 1,760,000 results.  I tried the same thing with “cheap commercial jetliner” and got zero hits.  Oh well…