I spent much of my childhood reenacting episodes of “I Love Lucy.” As an only child, my performances consisted of one-man acts with a make-believe Ricky, Ethel, and Fred. My grandparents’ basement—complete with 1950s furniture and a working kitchen—proved the perfect set. I admired Lucy’s quick wit, tailored fashions, and self-motivation. This August marks Lucy’s 100th birthday, and I am grateful for all of the play memories she inspired me to create and for shaping aspects of my adult-self. 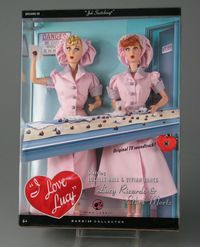 In the 1952 episode, “Job Switching,” Lucy and Ethel, embark on a mission of female empowerment and seek jobs outside the home. Their new boss at the candy factory charges the pair with wrapping chocolates as the sweet delights come by on a conveyor belt. At first the two perform rather effortlessly, but as the belt speeds up, Lucy and Ethel can’t manage the line. The two attempt to cover up the mishap by shoving the extra chocolates in their mouths, baker’s hats, and down their dresses. To commemorate moments such as these, Mattel Inc. created collectible editions of Lucy dolls. The company’s “Job Switching” set includes both Lucy and Ethel dressed in uniform. Mattel’s impeccable replication of the dolls includes faces “stuffed” with chocolates. The dolls even have rooted eyelashes. Lucy’s comical genius and facial expressions in this episode put a damper on my love affair with homemade chocolate peanutbutter truffles. However, I now use this stuff-it-away tactic for paper filing. I’m also still inspired by Lucy’s impeccable wardrobe of full skirts, Peter Pan collars, embellished hats, fur shawls, and gloves. And who can forget the stunning coat Lucy wore to the Tropicana on the night the club’s maître slipped Ricky a note requesting “We’re Having a Baby, My Baby and Me?” My grandma stowed a similar 1950s gown in the attic. During my “I Love Lucy” takes, I tried not to trip as I pranced around in this blue gown. Fans of the couple got a chance to play wardrobe stylist in 1953, when Whitman Publishing Company produced Lucy and Desi paper dolls. The set came with more than 35 items for Lucy and about a dozen pieces for Ricky. What I could do to my own wardrobe with the hats and shoes alone. Much “I Love Lucy” comedy resulted from Lucy’s failed attempts at clever or difficult tasks. While in Italy, film producer Vittorio Phillpe asked Lucy to play a tourist in his film “Bitter Grapes.” Given the title, Lucy’s convinced that the film is about the wine industry, and eager to soak up the local color before her movie role she decided to visit a vineyard. When Lucy arrived to the vineyard, the overseer assumed she’s an employee and sends her to the vine vat to stomp grapes with her large feet. The rest is television history, as Lucy ends up purple and Ethel gets the part. Precious Kids produced a Premier Baby Lucy Doll Collection claiming to use real baby photos of Lucille Ball. “Lucy’s Italian Movie” doll comes complete with a bunch of grapes in one hand and grape stained fingers on the other. A handkerchief is tied around her vibrant red rooted hair and the Lucy doll wears a peasant blouse and loose skirt. During my own trip to Italy, I did not get approached by a film director or stomp grapes, but I did think of Lucy as I sipped wine in the Palazzo. Play is a reoccurring theme in “I Love Lucy.” For her son Little Ricky’s birthday, Lucy tried, with no luck, to get George Reeves to make an appearance at the party.  Desperate to make Little Ricky’s birthday a memorable experience, Lucy dressed as Superman herself and managed to get stuck on the window ledge outside the Ricardo’s apartment. The real Superman eventually comes to her rescue. For Lucy’s 100th birthday, I hope fans alike will go to great measures like this to remember the lady who changed television and the role of female comedians.