I meet and work with many inventors, both professional and novice, and I love and admire them for many reasons. Chocolate is also something I love – all types and 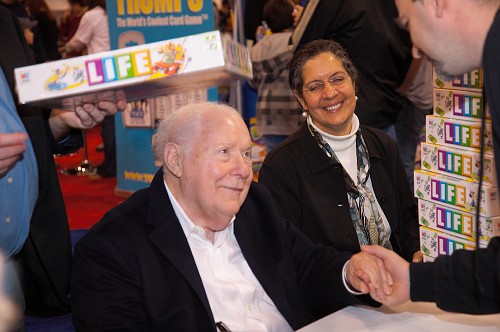 flavors. Both inventors and chocolates bring joy of varied play experiences or flavors, but you can't help but have a few favorites. Reuben Klamer is one of mine. He wrote an article for our ChiTAG Fair Program in 2009 that I recently rediscovered and so enjoyed reading, it occurred to me to share it in this column as it has wisdom as well as a piece of our industry history.

Inspiration and Perseverance are Essential for Success

Sir Winston Churchill once remarked, "Success is going from failure to failure without a loss of enthusiasm." That one sentence sums up my long career – sixty years and counting – pretty well. Believe me, succeeding is much more fun than failing. But either way I’ve always understood that to survive the constant rejection that is the hallmark of an inventor’s life you need two things: inspiration and a steadfast belief in your product. (Bonus points for having a sense of humor.)

My favorite illustration of perseverance? I was turned down an astonishing 21 times when I tried to sell my idea for what would become the classic Fisher-Price Preschool Trainer Skates – still on the market after 20 years and a worldwide hit. Twenty-one! It never occurred to me to abandon the skates and move on.

By then I was already well established as a toy and game designer and inventor, which should give you an idea of how tough it can be to make a living this way. But back when I attended my first Toy Fair in 1951, I was a young product development and sales manager for a start-up toy company. Dreaming of securing some space in the iconic Toy Center in New York, I arrived in the city only to be told there was no space left to rent. Dejectedly flipping through a trade magazine in the lobby, I spied an ad offering space to sublet. I hurried to the showroom, where I was shown a glass shelf. Unhappily I signed a lease and that little glass shelf became my first Toy Fair "showroom." I was persistent, all right, but I think having a sense of humor helped.

It can be a crazy business, for sure. The mechanism for one of my earliest hits, Gaylord the Walking Dog, sat on my desk for a year, maybe more. I just couldn’t figure out what to do with this mechanism – it puzzled me. Long story short: Gaylord became "Best Toy of the Year" in both the United States and France, where his photo appeared in France-Soir, a leading daily. That same season, Popular Science magazine singled out Gaylord as the "Worst Toy of the Year," because Gaylord needed "too many batteries" to operate! I have a special place in my heart for Gaylord.

Years later, when nothing was going right, I suffered a brief crisis of confidence. Certain I would never hatch another good idea, I took out a Yellow Pages book and began searching for a new occupation: Electrician? Plumber? Roto-Rooter man? This exercise left me determined to stick with what I knew and loved best, toy invention. I have never looked back. Sometimes I’ve done my best thinking – and creating – under pressure. Many years ago I had an appointment for a breakfast meeting with a senior vice president of Tupperware. I had  nothing to present and was beside myself during the 20-minute car ride from my home to the restaurant. As I approached the restaurant, an idea occurred to me for an easy-to-manufacture preschool toy. When I arrived I sketched my idea on a paper napkin. The Tupperware executive immediately responded, "I’ll buy it!" Busy Blocks was a smash hit for Tupperware, where it remained in the line for more than 30 years and was sold in 50 countries.

To the inventor’s arsenal of inspiration and perseverance, I would add appreciation for the happenstance of serendipity. In fact, I owe my biggest success, my signature creation – The Game of Life – to serendipity. More than half a century ago, I approached The Milton Bradley Company (later to become Hasbro) with an idea for an art center. The executives weren’t crazy about the art center I proposed, but mentioned that they were looking to develop a game for the 100th anniversary of the company. I accepted the challenge! I asked to remain overnight so that I might rummage through their archives. The next morning, when I stumbled across a musty old checkerboard bearing the words "Checkered Game of Life," I was electrified – by the word "life." It occurred to me that the word "life" would be a valuable name for a new game concept. The rest is history: at American International Toy Fair in New York next year, The Game of Life elebrated its 50th anniversary in 2009. I’m honored and humbled by the milestone, and exquisitely proud of the game’s popularity: more than 50 million games sold in 25 international language editions. (The Japanese edition, called Jinsei, has been the biggest selling game in that country for over 40 years.)

I’m often asked for advice on how to be successful as a toy inventor. Inspiration … perseverance … sense of humor.

I have always surrounded myself with quality, successful collaborators at the top of their  industries. High profile people I worked with included Bob Allen, a creator of Howdy Doody and  Tom and Jerry; Mel Shaw, a creator of Bambi; Friz Freleng, creator of Bugs Bunny, Porky Pig and Pink Panther; and Olaf Helmer, an early colleague of Albert Einstein at Princeton, chief mathematician at The Rand Corporation and one of our country’s first Futurists. I also worked with three space scientists from Cal Tech and JPL (Jet Propulsion Laboratory) on chemistry sets that were based on space exploration.

Remember that the best playthings for children are simple, with shape, structure and form  appropriate for their developmental stage. Great toys fire children’s imagination and can be played with in many creative ways. Watching kids play is a superior education and inspiring itself – do it often!

Finally, harness the joy in your daily existence and bring it to your work. Confucius reportedly said, "Find a job you love and you’ll never work a day in your life."

(Pictures in order: Reuben autographing Game of Life games in Hasbro's 2009 ChiTAG booth with Beatrice Pardo, Reuben with George Burtch of Hasbro at 2009 TAGIE’s where Reuben was honored for Lifetime Achievement, Reuben toasting his friend Eddy Goldfarb, 2010 TAGIE Honoree, Reuben and me at 2009 TAGIE’s, Reuben and his sons at 2009 TAGIEs.)