One thing about the Royal Wedding caught my attention—the dress. When I read the Telegraph’s description of the gown, “individual flowers…hand-cut from lace and hand-engineered onto ivory silk tulle to create a unique and organic design,” I pictured Cinderella’s mice and bird friends merrily sewing the extravagant gown. I also visited exhibit cases in The Strong’s National Museum of Play to say cheerio to the royal bride dolls. 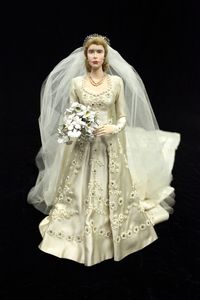 Designer Norman Hartnell fashioned Queen Elizabeth’s wedding dress with a sweetheart neckline and a skirt embroidered with 10,000 seed-pearls and thousands of white beads. Following the wedding, Queen Elizabeth kept Hartnell as her main designer and soon younger generations sought his fashions. These youngsters weren’t the only ones with a flair for royal fashion. Doll maker Dorothy Heizer stitched a stunning replica of the bride’s gown for her Princess Elizabeth doll. Heizer hand-stitched the dress of white satin and adorned it with 45,000 tiny seed pearls, rhinestones, and pearl-colored beads. When Heizer completed the doll she sold it to Mary E. Lewis, the first president of the United Federation of Doll Club. Lewis wanted one more accessory to complete the doll’s outfit—she commissioned W. Waters Schwab of the E.J. Scheer Inc. jewelers to replicate the Queen’s engagement ring. Any fashionista will tell you that when it comes to wedding attire no expenses spared. 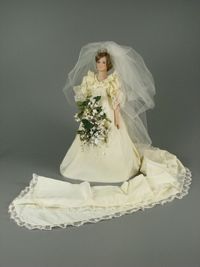 More than 30 years later, Queen Elizabeth’s son wed one of the most stunning brides in history, Lady Diana Spencer. Her wedding dress designers David and Elizabeth Emanuel recalled the momentous occasion in a 2006 CBS story. The Emanuels code-named their new client “Deborah” and employed two guards to keep the design private from the paparazzi and fans waiting outside their studio’s windows. The pair found inspiration in Diana’s presence and in St. Paul’s Cathedral (the scale influenced the 25-foot long train). Shortly after the public gawked at the bride as she walked the red carpet (I mean, aisle), Danbury Mint issued The Princess Diana Bride Doll. The order form says the doll captures Diana’s “captivating smile, her special poise, and endearing grace.” Seamstresses’ hand-stitched sequins and pearl-like beads on the doll’s dress of taffeta and embroidered lace. Like the Princess Elizabeth doll, the Princess Diana Bride Doll also sparkles with real diamonds on her tiara and earrings. British royal weddings aren’t the only ones that get celebrated through dolls. Story goes when Prince Rainer of Monaco proposed to Hollywood actress Grace Kelly, Alfred Hitchcock said “I’m very happy that Grace has found herself a good part.” Others in Hollywood celebrated the marriage as well. Helen Rose, two-time Academy Award winner for Best Costume Design created the wedding dress in just six weeks. Of course, three dozen seamstresses assisted in the process. A year after the wedding, Martha Thompson a charter member of the National Institute of American Doll Association and a skilled sculptor (crafted her first dolls from Ivory Soap) designed the Princess Grace of Monaco doll. The bodice of the doll’s dress features meticulous beadwork and a veil framed in lace.

Within a week of Kate Middleton's transformation to Princess Katherine, doll makers and collectors alike buzzed with talk of new bride dolls. I bet that Princess Katherine dolls will feature at least one trait from the dolls described above. After all, Queen Elizabeth loaned Princess Katherine her tiara. Prince William proposed to Kate with the very ring Princess Diana wore. And the style of Princess Katherine’s dress strikingly resembles Grace Kelly’s gown. But as with all wedding tradition, there is also sure to be something new.