What Marvin Glass was in Chicago, Larry Jones was in California, but with better weather, a Porsche, cutoffs and a t-shirt. His offices were on the beach with girls in bikinis, picnic lunches, turtle races, crazy 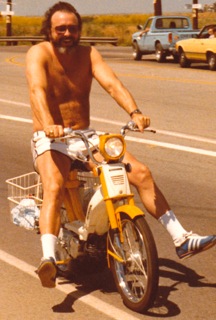 inventor presentations and much more. He and his partners formed California R&D Center on April Fool's Day in 1969 and Larry took over running it in 1972. They announced their entry into the toy business with a Playthings ad with them seated on toilets on the edge of the beach with the line “Getting Our Heads Together”.  The company was always unusual and their by-line was “anything is possible”.  I asked Larry if he would share one of his G-rated stories with us.

Larry: “There may be a few of you out there that remember how the toy invention business was a half a century ago … things were really different and I decided to open a toy invention company to sell ideas to toy companies.  Take a minute to focus on what this business was like in the late 60’s.  The Glass group was it … well maybe a handful of others including Eddie Goldfarb, but suffice it to say, the field was wide open and no one had experience selling concepts to toy companies and conversely, toy companies had no experience in buying outside ideas.

While there are a million stories, I do remember one that was as funny as it was entertaining.  California R&D Center, my new company, had just opened its doors and I thought I would try to get Wham-O to see me, but I needed a way to get in to see Spud Melin, their President and not the submission secretary.  I was convinced that a creative idea would set me up to be always welcome in the future.

I called Spud and told him I had an incredible idea that I called “The Communicator”.  It was a device that would allow you to communicate with anyone anywhere in the world and in any language.  It was small

and could be carried in your pocket.  I said this item would retail under $1.00 and could be used by male or female at any age over 6.  It would require very little tooling and your customer base would be worldwide!

He was blown away and immediately asked when he could see this great new item.  I said in a couple of days.  He said he would have the key executives assembled to review my presentation. The morning of the presentation, I drove to San Gabriel early as I wanted to make sure all was in order and did not have to wait long as everyone was there and could not wait for the appointment time and we all poured into the conference room.

After everyone settled in I retold my comments to Spud for those who did not hear them and then a hush went over the meeting.  I told them to think about what a communicator might be and then I pulled it out of my pocket and tossed it to Spud.  It took about 15 seconds for everyone to understand what it was.  It was a pencil!!  Anyone who could write could communicate.  Also please remember it was 1969 and the smart phones and electronics were not available then.  Everyone howled with laughter and I was given special permission to come back anytime and their president would personally review my submissions. This story led to the cornerstone of our new company, which was to think outside the box and be different.  From then on the word spread about this young and very creative design group on the beach in LA and we never had problems meeting with top company executives from then on.  We were on a first name basis.”

Pictures: Larry riding to work, the offices on Sunset Blvd. on the beach, Larry holding an ornithopter (an item that flew in the air and under water) and Larry today.