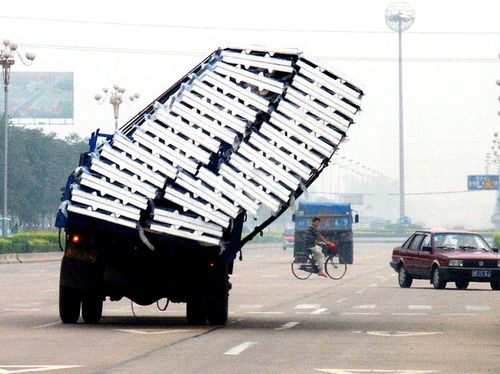 Due to Chinese government policy, changes in migration within the country and the increase in high value consumer product production along the coast, the toy industry is slowly being forced inland.  The further from the coast the more you need trucks to get toys to the ports of embarkation.

That is where the trouble starts because, according to a New York Times article:  “China’s Exports Perch on Uncertain Truck System,” “…as vital as trucking is to China’s mighty export machine, the government seems to be ignoring the drawbacks of what analysts say is an increasingly disorganized, inefficient and even costly way to transport factory goods to seaports….There are literally thousands of small independently owned trucking companies that compete with each through low prices that do not allow them to make money unless they overload their trucks.  The rising cost of oil plus the bribes needed to pass inspections are forcing many into bankruptcy.

This was a non-issue for the toy industry as production has historically taken place near ports of embarkation.  Now, however, the problems with the Chinese transportation system are our problems.

What surprised me to learn is that, despite the highly competitive trucking situation, it is actually more costly to move freight by truck in China than in the US.  According to the American Trucking Association, moving goods by truck in the United States costs approximately $1.75 per mile. That includes driver salaries, truck leases, insurance, tolls and many other related costs.

By comparison, trucking costs in China’s two biggest export regions — the Yangtze River Delta region near Shanghai and the Pearl River Delta around Hong Kong — are $2.50 to $3 a mile. That is despite low pay to Chinese drivers, who might earn only 25 cents an hour, versus about $17 an hour in the United States.

Bottom line, the cost of shipping goods in China is going to rise as manufacturing moves away from the coast.  Disruptions due to an unstable trucking system are only going to make moving freight harder, less predictable and more costly in time.

It’s not a good combination.