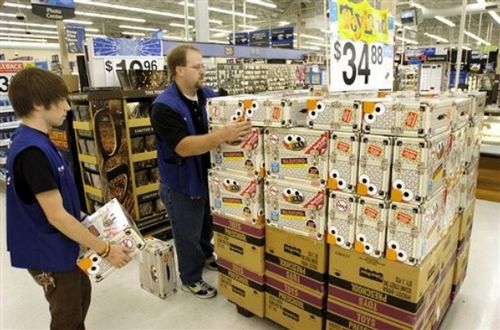 I many years ago learned the power of high quantity displays when I visited a grocery store which had decided to create the world’s largest canned pea display…ever.  I can still remember gawking in amazement.  My reaction must have been much like that of those first primitive travelers who stumbled upon the Pyramids or Niagara Falls.

I never thought they could sell that many cans of peas but each week as I returned that display of peas shrank until after about a month it was gone.  So many cans were purchased that I am sure that to this day people from that part of the country refuse to eat peas.

I was therefore amazed that Wal-Mart, a couple of years ago, walked away from the notion of mass displays.  As it turns out, they re- learned the lesson the hard way and are back to massive displays.  At least that is what we learn in a New York Times article entitled “Stuff Piled in the Aisle? It’s There to Get You to Spend More,” The article states that “[a]fter the recessionary years of shedding inventory and clearing store lanes for a cleaner, appealing look, retailers are reversing course and redesigning their spaces to add clutter.

Based upon what I read, I think this may be a great time for marketers and salespeople to come up with proposals that drive sales through quantity.  As the article puts it:  “[I]f shoppers walk into a less organized environment… their first impression is going to be, ‘O.K., you’re going to find lower prices here…’”

Stephanie Clifford, the author, spends a large part of her article pointing out how Wal-Mart erred two years ago when it cut down on departments, reduced sku’s, did away with pallets in the aisles and in general cut down on inventory.  Here is how the writer, Clifford, puts it:

Wal-Mart Stores may provide the marquee example of a failed makeover. Two years ago, it remodeled, trying to hang on to Target shoppers who traded down to Wal-Mart during the recession.

Out went the pallets of items like juice boxes or sweatshirts stacked in the centers of aisles. Merchandise on “end caps,” displays at the ends of aisles, slimmed down. Shelves got shorter, and Wal-Mart whittled the number of items it carried by about 9 percent, so as not to overwhelm shoppers. Customer satisfaction scores soared.

Despite those ratings, Wal-Mart has been encountering one of the longest slides in domestic same-store sales in its history.

As a result, Wal-Mart fired the minds behind that strategy and has gone back to “stack it up high and watch it fly.”  That’s good news for manufacturers and consumers.

It’s not just Wal-Mart going back to heavier inventories.  “After years of expansion, many retailers are halting building plans and closing stores as sales and traffic shift to the Web. That means the main way to increase revenue is by selling more stuff at the existing stores.”

Dollar General is raising the height of its standard shelves to more than six feet; J. C. Penney is turning its empty walls into jewelry and accessory displays; Old Navy is adding lanes lined with items like water bottles, candy and lunchboxes; and Best Buy is testing wheeling in bigger items, like Segways and bicycles, to suck up the space created by thinner TVs and smaller speakers.

It may just be that it’s going to be a good time to be a salesperson again as long as you think big…and messy.