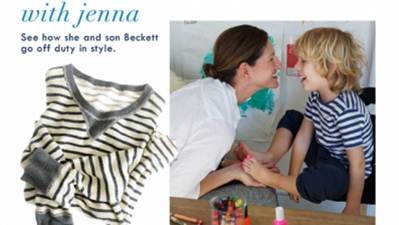 Have you heard about the little boy with the pink nail polish?  Well, it’s become quite a story.  J. Crew ran an ad featuring a five year old boy having his toenails painted with pink nail polish by his mother. The mother in question was not just any mom but J. Crew's president and creative director Jenna Lyons.  The little boy was her son and it just so happens that his favorite color is pink.

As you would expect, some media commentators saw it as an opportunity to see the end of civilization as we know it.  Here is how ABC News puts it:

"Not only is Beckett likely to change his favorite color as early as tomorrow, Jenna's indulgence (or encouragement) could make life hard for the boy in the future," Brown wrote. J. Crew, known for its tasteful and modest clothing, apparently does not mind exploiting Beckett behind the facade of liberal, transgendered identity politics."

This reminds me of the earlier dust ups over Teletubbies and Spongebob Squarepants.  The late Jerry Falwell and other social conservatives thought the characters were not silly and innocent but gay and dangerous.   I remember watching the creator of Teletubbies facing off against Falwell and telling him that he had made something sweet and innocent into something dirty.  He sheepishly backed down.

The reality is that children are different than adults.  Their world is simpler and innocent until adults decide to get involved.  What a child brings to a toy, a movie or nail polish for that matter is different than what an adult brings to it.  It’s a bit like when someone says something innocent at a dinner party and someone else decides to assign the comment a double entendre that was not intended by the initiator.

And by the way, most adults aren’t worried.  My company, USA Toy Experts, recently did a survey of 1541 adults asking if they felt that the toys their children chose to play with either indicated a sexual orientation or could influence it.  In other words, if a boy played with a doll, did it mean that he was gay or would become gay because he played with a doll?

Based upon these numbers we believe that the public is not concerned about these issues.  They recognize that play is a child's fantasy.  It is only when adults apply their own sets of values to child's play that what is innocent become perceived as dangerous.

So, at least to me, it’s just politics.  What a shame that adults who have their own agendas and biases can turn a child’s innocent world upside down.