I have written in the past about 3D Printing, a technology that allows a user to print out three dimensional objects and thereby bypassing traditional manufacturing processes.  It was brought to my attention that Oskar van Deventer, an internaitonally known puzzle designer, was using this process to sell his puzzles directly to consumers.  I asked him to tell us about it and below is his guest blog. 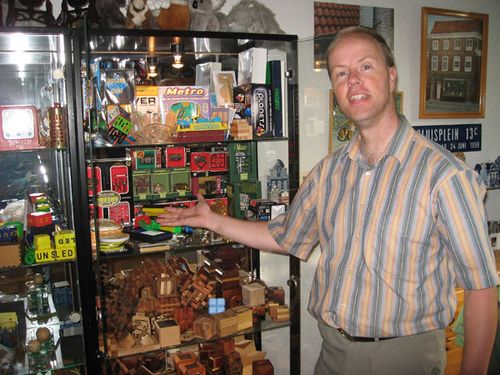 When reading about my world-record "Over The Top" 17x17x17 puzzle , Global Toys news asked me to write a column about the history behind this puzzle. Here you are. 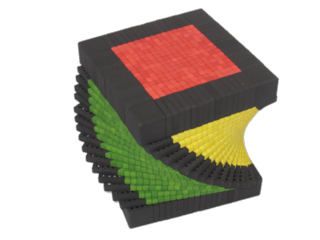 It is the dream of every author and inventor to get published. It has definitely been my dream. Designing mechanical puzzle toys since I was 12 years old, I have always been looking for ways to share my puzzles with the world. In the 1980's, I built my first prototypes of cardboard, paper, metal wire and poorly-cut wood. In the 1990's, I learned to cut and shape plastic to create much better looking prototypes. With these prototypes, I could convince manufacturers to take designs of mine in production. Now, several of my puzzles are now being mass produced by some well-known puzzle toy manufacturers, like Hanayama, Smart Games, Thinkfun, Recent Toys, Bit and Pieces, Popular Playthings, Mefferts and some other. Still, only a small percentage of my puzzle designs could get published for puzzle collectors to buy them.

Figure 2: Oskar's Cube , one of my mass-produced puzzles 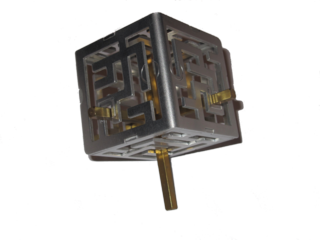 A major breakthrough came in 2003, when Sonoma-based retired master-tinkerer George Miller bought a 3D-printer and offered a prototyping service to puzzle designers. George's 3D printer spews out thin molten threads of plastic. A computer and stepper motors control precisely where the plastic is deposited. I started sending George 3D computer puzzle designs, and George built many puzzle prototypes that would be impossible to mass produce. George also started a little web shop called Puzzle Palace, offering successful prototypes for sale and giving a royalty percentage to the inventor. Given the small scale of his operation and the large cost of 3D printing at that time, George's prices were high and the sales were limited to some happy few specialized collectors. But the good news was that more people could buy my puzzles, if they were willing to pay the price.

Figure 3: Moby Maze , one of my first 3D-printed puzzles The big breakthrough came in 2009 when 3D-printed math-art pioneer Bathsheba Grossmann introduced me to the 3D-printing start-up Shapeways . The business plan of Shapeways was to introduce 3D-printing on an industrial scale, and to enable artists to sell their work through the "Shapeways Shops". So I opened my own Shapeways Shop  and I started uploading 3D puzzles designs. It was an amazing experience. After finishing a new puzzle design and uploading it, I could immediately offer the puzzle for sale to anybody in the world. This way of using 3D-printing and selling puzzles was quickly followed by enthusiasts from the Twisty Puzzles Forum , resulting already in tens of puzzle shops and many hundreds novel 3D-printed puzzles for sale via Shapeways. The inventor's dream is coming true.

Figure 4: Gear Shift  one of my latest designs As for the "Over The Top" 17x17x17 puzzle, I built this puzzle to demonstrate that with 3D-printing, you are limited only by your own imagination. The previous world record was a 12x12x12 puzzle, a brilliant design by Leslie Le from China. . Seeing that, I decided to go "Over The Top."