The Army has many soldiers and a good number of generals, but there have been fewer heroes, Medal of Honor winners, and the like. True heroes are few and far between, and perhaps one of the acid tests of a hero is whether his or her actions primarily benefit others. 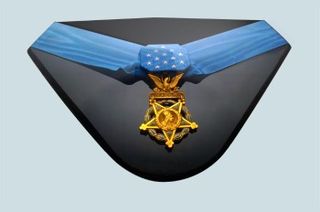 To be a hero you must be acting for the greater good, in the interest of others, even if it is at your own expense. Many Medal of Honor winners died saving others. It is always a shame to lose such great men and women, but that is one of the things that makes one a hero.

The toy industry has had many great leaders, larger than life individuals like Louis Marx, Marvin Glass, and others. They were and are the generals of the industry, but that alone is not what a hero makes. All generals are not heroes, though some no doubt are.

The toy industry has had heroes, though they are by definition rare. One such toy industry hero, in my opinion, is Mr. Rick Woldenberg. He has spent a great deal of his own money and a couple years of his life standing up to the US government, Congress, and the Consumer Product Safety Commission on our behalf. He is relentlessly, tirelessly, and sometime even exhaustedly pushing back against the implementation of some of the most ill-conceived safety legistlation the world has ever seen.

The inhabitants of Wonderland – the Red Queen, the Mad Hatter, and others – would be aghast at the absurdity of what has been passed into law by the Consumer Product Safety Commission. Now, I know it was all well-meant, but it is damaging and costly to our industry. Why is it that Rick Woldenberg must stand up alone? I cannot fathom this. The cost of lead testing is so high that many smaller companies cannot and will not survive long. Throughout Mr. Woldenberg’s 25 years of toy safety testing, about 300 units of each product SKU are destroyed in the testing process each year. That seems like a lot of wasted product to me. And in 25 years Rick’s companies have never had a safety problem, so the destructive testing of 300 units each year seems to work.

Under the new toy safety laws these same companies will have to destroy 81,000 units a year of each SKU to accomplish the same thing. Does that seem wasteful to you? Wasteful of time, money, oil? It's not a very 'green' policy, I would say, though it's good business if you are a testing firm, no doubt. Imagine the waste of destroying 81,000 units each year of every toy in the market place! That wouldn’t be wasteful, that would be Insane. Before the new CPSC legislation, the legal lead level for toys was 600 ppm maximum. This is a number that is not known to be associated with any ill effects, and a number that toy companies can very easily stay under. After all, leaded paint may contain 20,000 parts per million, while paint without lead will still always contain some small percentage of lead, 10, 15, maybe 30 ppm. That much lead could easily blow in through a window and contaminate a sample inadvertently.

600 ppm was a reasonable number that any and all manufacturers using paint without lead could easily meet, but 20 ppm could come from anywhere and is now the current limit. If 600 ppm is known to pose no hazard, why is 20 ppm so much better, especially when it is almost impossible to meet? If 20 ppm is acceptable, does that mean that 21 ppm is a danger? No one will tell you that that is so. At the onset of the Revolutionary War we had Paul Revere and a few other vanguard brave souls that put themselves at risk in the interest of all. Whatever else might be said, Mr. Rick Woldenberg is doing just the same. He is demonstrating to us all that one man can take a stand and one man can make a difference. If he is successful, our entire industry will benefit.

Thank you, Rick. You are a toy industry hero, as well as a heroic example of how, in our free and open society we can stand openly and disagree, and that one person can make a difference.