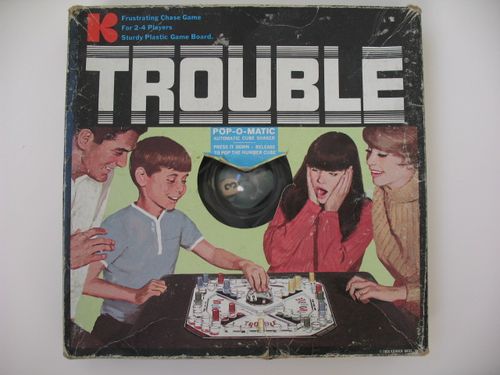 I had Mary Couzin’s great posting on toy industry families on my mind when I heard that Frank Kohner had died on February 6th at the age of 100.   The Kohners, Frank, Paul and Michael, were and still are a great toy industry family.

Frank and his brother Paul were true toy industry innovators who played a major role in shaping the modern toy industry.  These men were pioneers in the use of television toy advertising and brand development.  They were also innovators who created classic games like Trouble with Pop-O- Matic and Hi Q Games as well as pre-school and infant toys like the famous Busy Box

When I heard about the passing of Frank, I called Michael Kohner.  Michael respectively Paul’s son and Frank’s nephew, has continued to make his family name synonymous with toys by becoming one of the industry’s most prolific and respected game agents.  I asked him to share a little of his family’s rich toy history.  Here is what Mike had to say:

Kohner Bros. was started in 1940 as a wooden bead company by my father Paul Kohner who had escaped the Nazis from Czechoslovakia.  He brought his family to the United States including his brother Frank (10 years his junior) shortly thereafter.  Paul made Frank his 50% partner upon his arrival. They made pocketbooks and necklaces out of colored wooden beads (the family business in the old country) that fortunately for them became the height of fashion during the war years.

With the knowledge of wood, their first excursion outside of beads were wooden toys (pull toys, specifically one called Tricycle Tom) and in the mid-forties Paul obtained the rights to push button puppets from a Swiss inventor.  These puppets (the now familiar ones you push from the bottom and they wiggle on top of a base) proved to be a big success and further propelled the company into

the toy business. These same push-button puppets were later to be made of plastic and marketed in every conceivable character license including Disney, Hanna Barbera, King Features, and Marvel to name just a few.   These puppets were sold in every discount chain in America from Woolworths to McCrorys. To reminisce, all one has to do is go to Ebay and hit “Kohner push button puppets”

Kohner Brothers was also among the first companies to convert to plastic and once they did that, there was no turning back from success…  It took a lot of guts and entrepreneurial spirit to take them to this next level.

Paul and Frank wanted their business to grow by promoting their products on television.  They needed a vehicle and racked their brains and everyone else’s for an idea.  They had a seed.  They grew up with a game in Germany in the early 1900’s called Mensch Argere dich nicht which was similar to Parcheesi.  They challenged their VP of R & D Albert Stubbmann to come up with a promotional feature which gave birth to the “Pop-O-Matic” (no loose dice randomizer).

The brothers’ first television promoted product therefore was the Trouble Game featuring the “Pop-O-Matic” device.  In those days, television advertising was much simpler than today.  An advertising agency would tell a company like Kohner Bros. how much it would cost to run a reasonably successful T.V. campaign in a given regional market.  Based on that information, the manufacturer added $2.00-3.00 per unit to the selling price in order to cover the cost of the campaign.  For example, if Kohner Bros. ran a television campaign in the tri-state area it might cost $200,000.00. Based on that figure, Kohner Bros. knew it had to sell 100,000 pieces in order to cover that cost.  Any sales over that really meant gravy.

Paul and Frank knew that while Mensch Argere Dich Nicht (Trouble as we all know it today) was great unto itself, “Pop-O-Matic” (with the no loose dice feature) was even bigger. After its initial acceptance, they quickly realized that they could add other games with Pop-O-Matic.  In that way, a commercial for one Pop-O-Matic game was for all intent and purposes a commercial for all Pop-O-Matic games.   The TV jingle, “ TROUBLE, TROUBLE IS THE NAME OF KOHNER’S POP-O-MATIC GAME” soon became a recognizable tune and by 1975 the company was selling over 1 million pieces a year.   Milton Bradley now owns the rights to Trouble and it is still a very strong staple.

What consumer today doesn’t know the name Busy Box which was the flagship of the Busy brand of toys which Kohner marketed so successfully?  Little do people know that the Busy Box came to the Kohner Bros from a pair of brother inventors who brought them a table top full of various activities for a child to do.  The Kohners were extremely inventor friendly and turned this idea completely around into the crib toy we know today.  The inventor and his family earned huge royalties as a result.    Let’s not forget the HI-Q brand with its flagship game of HI-Q Solitaire where a player jumps one peg at a time to see if they are a “Genius”.   You could probably say that it was the Kohners who were the geniuses for seeing the value in game that was both so wonderfully simple and yet so complex.

Paul passed away in 1965 at the early age of 65.  His son Michael at the age of 22 came into the business and began to work together with Frank.  The business continued to grow until 1969 when it was sold to General Foods at which time Frank went on his way to start a new a new and highly successful house wares   business.    Michael stayed on with Kohner Bros. as a VP of General Foods where he was in charge of many facets of the family business as well as one of the most successful international licensing programs that were legacies of his father and uncle. Michael stayed with GF until 1975 when the company was sold to Gabriel Industries.

Paul and Frank Kohner certainly deserve a moment of thought and gratitude for their contributions to making the toy industry what it is today.