It's a good question, and no one in the industry seems to know the answer for certain though many have theories. It is an enigma wrapped in a conundrum – a mystery. 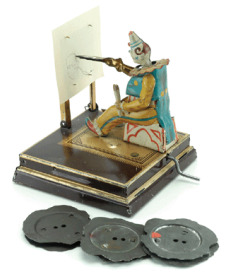 A long-time industry friend recently told me that the Toy Fair tradition is over 100 years old. He said it started in a hotel where buyers would come to many different rooms to see wares that had been brought back from Europe, which was the source of all toys back in the 1800s. I believe the toy building itself was once that very hotel.

My friend went on to elaborate his theory that toy shops, having depleted their shelves over the Christmas holiday, would need replenishment. Leaving for Europe to scout for new stock to fill their stores, toy traders would board steam ships and make the Atlantic crossing, traveling to Europe to find and acquire toys for the following Christmas season. They would then board the ships with samples and steam back across the ocean to America, arriving back in New York once more – the entire trip lasting six weeks or so.

That would make it about the middle of February, Toy Fair time as we know it today. The traders would set their displays up in their hotel rooms and buyers from shops around the country would travel to NYC, the undisputed center of American commerce at the time, to view, choose, and place orders to fill their toy shelves for the coming year. To this day the show remains in Manhattan (for however long yet we do not know) in February for reasons known only to God. But this is an eminently logical and believable explanation for how this came to be; a very good theory. Now, an alternate explanation of the origins of the Nuremberg Toy Fair, as well as the New York Toy Fair, has been proposed to me by an esteemed industry veteran.

And I quote: “[You're] Close – but the reason I've heard for Toy Fair being in NYC at Feb was tied to a supply, not a demand. The industrious farmers in Germany would spend their winters not farming but inside busily making wooden toys during the off season. Come spring, they'd sell their wares before planting would begin. That was the start of the Nuremberg toy show. American toy buyers would make the trip to Germany, and by necessity, would have to stop in NYC on the way (and back). American toy and game makers would take advantage of this and try to sell their products there and then. So . . . thanks to German farmers, we toy inventors must trudge off to NYC every winter.”

It might be the same story, just told differently. Clearly the New York show sprang from the loins of the Nuremberg show, which is now the largest toy show in the solar system.