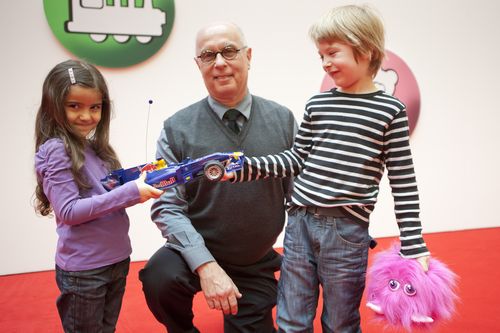 The Nuremberg Building Our Future Girls & Toys Conference has, as you would anticipate, an appropriately international group of participants.  The Spielwarenmesse and my company, USA Toy Experts, invited a small, select group of toy industry professionals and researchers from Canada, the United States, Germany, Israel, Austria, France, Spain, the United Kingdom and the Netherlands to join us in a discussion of the question:  “Do the toys that girls play with as children have an impact on the academic and professional choices they make as adult women?”

I had put on a similar conference in New York last September with only American participants.  Like the New York conference, our participants engaged in a highly intelligent and spirited conversation for four hours.  They added some new approaches but, like their American counterparts, saw nature as a major force in what interested boys and girls vis a vis toys.  They also agreed that parents played an important role as well.  Parents, from the behaviors they model for their children to the toys they pick out for them engage in a conscious sometimes unconscious social engineering.

One new area that was explored was, ironically, about the need for boys to learn how to nurture through toys.  The concern was that in the low birth rate European countries, there would be no one to care for aging parents.  With women in the work force and with men unprepared to nurture, who will provide the care?

A highly important result of this conference was our being presented research data conducted by Maria Costa Ferrer and Miriam Morante Bonet of the Spanish based AIJU.  The AIJU is a private, non-profit Spanish organization that promotes, among other things, research on children and play.  I will provide more information on the AIJU and its study in later postings but what I wanted to cover the survey they conducted with 1507 children.  What they were attempting to do was look beyond the two bucket system of thinking in terms of “Girls” and “Boys” when considering what interested children.

I will write about what they found in my next posting.