Jim Hill wrote an entertaining story on how Don Rickles came to be the voice of Mr. Potato Head in 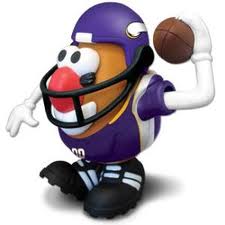 Pixar’s Toy Story films (thank you, John Lasseter). The story is a clever tribute to the tens of millions of couch potatoes on Super Bowl Sunday. I think we should also include the Potato Head’s inventor, George Lerner, in such a tribute.

Peggy Brown authored the following story for the TAGIE Awards last November as George was honored In Memoriam. His partner Julius Ellman accepted the award on George’s behalf.

Before we came to know Mr. Potato Head as the world renowned celebrity he is today, we must explore his roots…. or the fact that he is so charmingly down-to-earth, he is practically a root himself.  Once upon a time in 1949, Mr. Potato Head was born of the brilliant mind of George Lerner, an inventor from Brooklyn, New York. George and his friend, Julius Ellman, had merged their talents and their names to form a toy development company called Lernell. George was a graphic designer, fine artist, and a skilled model maker. During WWII, he worked for Buddy-L to convert their entire metal vehicle line into wood, as metal was in short supply. Julius started out as a food scientist, and served in the army from 1942 to 1945 where he achieved the rank of Master Sergeant and Special Agent Counter Intelligence Corps. When the war was over, George and Julius combined forces in Lernell. Julius’ sons, Steven and Fred joined Lernell 1980s, but back in the early 50s is when things really started to cook.

The concept was to stick plastic features on fruits and vegetables and make funny characters, but what wasn’t funny at the time, was that the hungry years of wartime were not yet out of recent memory, and the idea of wasting perfectly good food as toys for kids might not have been such a good idea after all. Or was it?

George persisted, as all good inventors do, and was able to convince a cereal company to use sets of potato parts (sans-spuds) as prizes in their cereal boxes. Not long after, George showed his set of tuber-trinkets to the original Has-bros, Henry and Hillel Hassenfeld, who in turn showed it to Henry’s son Merrill. Merrill loved it! A deal was struck to let Hasbro manufacture these sets moving forward, potatoes seemed to work better that bananas or tomatoes, so they officially named it Mr. Potato Head.

In 1952, Hasbro made a TV commercial to introduce Mr. Potato Head to the world, and the world welcomed him by buying over a million sets the first year, giving true meaning to the proverbial title, Hot Potato!

Over the years, the real potatoes gave way to plastic ones, with storage for extra parts inside, and Mr. Potato Head became an internationally-recognized character. He gave up his pipe to the U.S. Surgeon General to support the Great American Smokeout, he quit being a couch potato and received an award from Arnold Schwarzenegger and the President’s Council for Physical Fitness, and he, along with his wife, joined the League of Women Voters to help rock the vote. Since then he’s made it to Hollywood and starred in the Toy Story movies with the help of the voice of Don Rickles, and still remains one Super Spud.

If you're a Potato Head fan, check out http://www.spudstravels.com/ and see how one fan has taken his super spud with him from Milwaukee to Morocco, and all around the world! Go Spud Go!