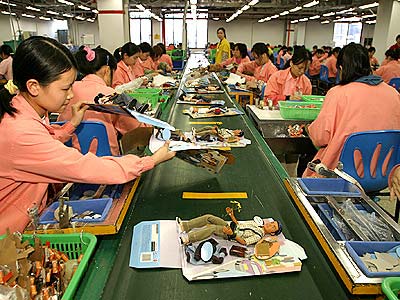 As I reported earlier, rumors continue to circulate that many workers may not return to the toy factories in southern China after the Chinese New Year which begins February 3, 2011 and will end on the 18th.   During the holiday, workers traditionally return to their home provinces to visit with their families.  These home provinces can be a long distance away.

It seems that these rumors may be grounded in a Chinese national and local policy to move toy manufacturing from southern China to the north.  I have heard from an informed source that some cities in northern and central China will be actively working to keep their citizens home.  They want them to to work in new local factories that have been backed by loans from the Chinese government.  These factories are designed to house labor intensive industries like toys.

This reality could negatively impact south China labor availability seriously by the spring of 2011.  As a result there will be pressure to re-locate manufacturing to the north over the next couple of years, which is what the government wants.   In the meantime, this could mean troubles for existing toy factories as they struggle to find a labor supply and to keep wage increases in check.

Toy companies and retailers may find that it will take longer to make and ship goods this coming year.  In fact, there could be shortages as factories struggle to work with available assets.  This will bear watching very closely.

If you have any information on this matter that you would like to share with readers please write in and let us know.  This is a very important issue for the global toy industry.