Last week I attended “The Second Symposium on Gender in Media.” Taking place in Los Angeles, the event was part of the Geena Davis Institute on Gender in Media’s on-going efforts to shine a light on gender issues in all forms of media.  The Institute, founded by noted actress Geena Davis, does quantitative and qualitative research and has added a great deal of light to the discussion of gender in all media platforms.

As you are aware, I have been studying how the toy industry handles gender in packaging, product selection, merchandising and advertising.  Madeline Di Nonno, Executive Director of the foundation, participated in and added much to my September “Girls & Toys Conference” in New York.  I returned the favor by attending her event, much to my benefit, as I found out just how similar the issues are between traditional toys and media.

The conference consisted of a roundtable in the morning and a forum in the afternoon.  The roundtable was an intimate gathering of eighteen people who were chosen for

what they brought to the discussion.  I represented the toy industry and there were also leaders from the Rand Corporation, PBS, Nielsen, the United Nations, the Annenberg School for Communications, the Girl Scouts, Dream Works, The American Center for Children and Media and more. 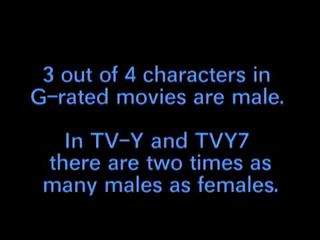 Here is some of what I learned:

Among top grossing movies with G ratings, boys outnumber girls three to one.

Seven percent of directors are female.

Thirteen percent of writers are women.

Twenty percent of producers are female.

70.8% of speaking roles in Family Films are male

What does this have to do with toys, plenty; that in my next posting?