’Tis the season when amateur toy and game shoppers abound. People are buying gifts for recipients whose tastes and skills they might not know all that well. And there is an overwhelming assortment of available alternatives. Or at least it seems this way to the amateur.

The last thing in the world a retailer wants is for a customer to be immobilized by indecision and consequently head out to another place to complete the gift purchasing. Researchers at Columbia University find categories can help here. Categories allow a shopper to break down the decision into a series of more manageable steps. That soothes customers most dramatically when they’re unfamiliar with the products they’re selecting from.

The power of categorizing is so great that even meaningless groupings make customers happier: Those Columbia University researchers invited shoppers at a mall food court to select a free cup of coffee from a menu listing different blends. Consumers unfamiliar with the alternatives who chose from a menu listing the choices under headings Category A, Category B, and Category C were as satisfied as those who chose from the meaningful categories “Mild,” “Nutty,” and “Dark Roast.” Both groups presented with the categories were happier than those presented just an uncategorized list.

Of course, when you’re requiring people to pay for the merchandise, they’ll start asking, “What’s the meaning of Category A, B, and C?” Therefore, it's best if the division is designed to give useful information. In her recent post titled “Highlighting the Value of Play in Toys,” Ruth suggests categorizing toys and games by the type of skill the item builds.

Once you’ve done that, assist the shopper by matching the item’s skill level to the skill level of the prospective user. It’s the toy-and-game equivalent of the boys clothing salesperson holding up the sweater and asking, “Is this about how big he is on top?” 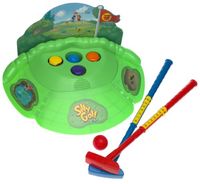 Even when people are shopping for themselves, there can be a treacherous mismatch of the skill level of the customer with the skill requirements of the item being considered for purchase. Researchers at University of Michigan had participants practice putting golf balls. Half the participants putted from a distance of ten feet, while the others putted from a distance of three feet.

After completing their putts, each participant was asked to choose from among golf balls marketed to different skill levels. The balls labeled as being for higher skill levels cost more. The people in the three-foot-putt group had sunk more shots than those in the ten-foot-putt group, and as a result, the three-foot group chose the more expensive balls. They’d misjudged their capabilities.

Why do I call this a treacherous mismatch? Because it leads to frustrated customers and, with certain toys and games, it could even lead to the equipment and the user getting damaged. Your customers who are frustrated or injured are quite likely to start considering themselves to be your former customers.

An alert salesperson can gain the skill information from the right questioning regarding experiences. For instance, with board games so new even professional game shoppers might not know the skills required, the salesperson could keep in mind that Atlantis is a logical extension of Candyland and Panic Tower has been described as a blend of Jenga and Twister.