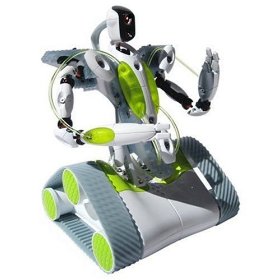 In past blog postings I have written about “Moore’s Echo,” the law that states: Whatever is cutting-edge technology today will be a toy in 7 years.  If you want to read more about Moore’s Echo, check out my posting, “Albert Einstein, Hanson Robotics and Moore’s Echo…think of the toys you can make.”

Well, the funniest thing happened.  I found an example of the reverse; a toy becoming an affordable version of cutting edge technology.  At least that is what it looks liked to me as I read a New York Times article entitled “Protecting Your Home From Afar with a Robot.”  The article talks about a toy robot called the Rovio that is being used for in home security.  Here is how the article puts it:

"[The] robot, a modified version of the Rovio from WowWee, has a camera, microphone and speakers atop a three-wheeled platform. From anywhere with a Net connection, [the owner] can send [the] robot zipping around the house, returning a video signal along the way… For all its power and ability, the Rovio is usually found in a store’s toy section for about $170.”

The article goes on to make this, at least to me, startling point:  “Home security is blossoming for toy makers who can match the technical power and flexibility of the computer industry with the mass-market prices that come from large production runs.”

So who are these toy manufacturers?  There is the Parrot A.R. Drone and the Spykee Spy Robot from Meccano / Erector. Most of these sell for over a hundred dollars and represent a real opportunity for the toy industry to put its ability to create inexpensive products in big numbers to work in other product segments.

So, how is this for “Gottlieb’s Rebound:”  “A toy with a purpose is no longer a toy when it does the job cheaper than available technology.”  Seems like there is a huge opportunity for toy companies who are able to see beyond their products as playthings and diversify into other product areas.

Things are constantly changing and this is one area where they could be changing in a direction that benefits the toy industry.